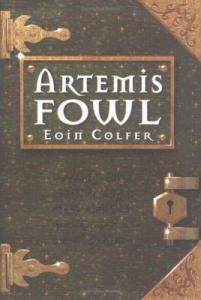 Artemis Fowl is the pinnacle series of the author Eoin Colfer. The books detail the adventures of Artemis Fowl, a genius child who already runs his late father’s criminal empire. He spends his days inventing new technologies and running illegal enterprises around the world with his trusty bodyguard, Butler. Until one day, he discovers the world of faeries hidden beneath them. Being the person he is, Artemis soon goes head to head with the Faeries’ elite LEPrecon police force as his money-making scheme involves kidnapping the Faerie officer Holly Short. Eventually, they join forces to stop a multitude of other evil forces out in both worlds.

This series is one of my favorites to read because it’s filled with action from beginning to end. Whenever there’s expositional dialogue, we can always expect it to be filled with witticisms and funny personality clashes. Also, the scenes are always fresh with new ideas, rather than repetitively showing the same fight scenes like other books. Artemis always finds solutions with ingenuity, while his friends employ bravery and combat training. The friendship and camaraderie between Artemis and Holly creates a lifetime team, which involves both life-threatening situations and everyday banter.

Over the course of the series, Artemis Fowl develops a lot as a character. Although he is introduced as a cold and ruthless genius, we learn he isn’t without some good inside. He learns to respect his closest friends, and is even willing to give his life for them. The main reason for this is that he never had any friends before that have earned his respect.
The setting for this book is also very notable. While most books are either sci-fi or fantasy, Artemis Fowl includes both. While the Faerie Folk have ancient magic, they have also developed extremely advanced technologies over the thousands of years. Their inventors have created flight suits, contact lenses with built in cameras, and other creations from our wildest imaginations. It was very creative and daring for Colfer to mesh these two genres together, and the result is a literary masterpiece.

When you have a chance, you should definitely give this series a read. Although Eoin Colfer has written many notable books, the Artemis Fowl series will always be one of his best. The fun storylines will have you burning through the books.

The Artemis Fowl series is available for check out from the Mission Viejo Public Library and Overdrive.