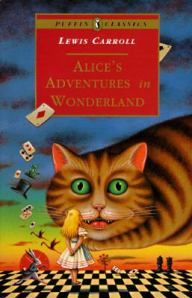 Alice’s Adventures in Wonderland is a fun fantasy book for all ages. The story begins with Alice and her sister on a bank of a river. Alice peers into her sister’s textbook, and she tries to think what is the use of a book without pictures and dialogues. When Alice begins to pick daisies to create a daisy-chain, she spots a rabbit mumbling to himself. She thinks that is natural until the rabbit pulled a pocket-watch and looks at it. The girl becomes curious and follows the White Rabbit down the deep rabbit-hole.

Soon after she lands, she wanders through a long hall with doors on each side and finds a tiny door behind a curtain without a window. Later she encounters and talks to a blue caterpillar that is smoking a hookah. When the White Rabbit sees Alice, he thinks that Alice is Mary Ann, his house-maid, and tells her to fetch a pair of gloves and a fan. Afterward Alice meets the Queen of Hearts and plays a game of croquet. The croquet game uses a live flamingo as a mallet and a hedgehog as the ball.

Were Alice’s adventures real… or was it all a dream?

You’ve probably seen the Disney adaptation of this classic book, but did you know there’s a sequel? Read more about Alice’s adventures in Through the Looking Glass.