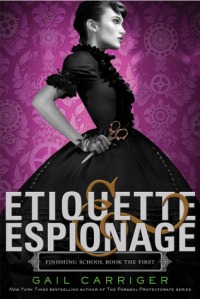 Sophronia Angelina Temminnick does not act at all like a lady should. While her other sisters were acting grown up when they had company, Sophronia climbs into a dumb waiter to eavesdrop on her mother’s conversation. When she falls out and rips her skirt, she wreaks havoc on all occupants of the room. Immediately after this unfortunate event, her mother decides that it is time for Sophronia to go to finishing school and be presentable at her sister’s coming-out ball. This is not exactly Sophronia’s first choice… but she goes along with it.

When she gets into the carriage with Mademoiselle Geraldine, the headmistress of Mademoiselle Geraldine’s Finishing Academy for Young Ladies of Quality, she learns this woman is not who she says she is. In fact, she is actually only a member of the finishing school herself, sent to get the three children currently in the carriage. And also to retrieve a mysterious prototype, which happened to be the cause of a flywaymen attack.

After safely reaching the roaming blimp, which served as the school, Sophronia and the other students are escorted to a platform hanging under the school by a handsome werewolf. That is not the only non-human inhabitant of the school: one of the teachers is a vampire.

Once on the school premises, she gains a better understanding of the school’s purpose, which is apparently not as innocent as it appears. That purpose is not only to teach young ladies proper etiquette, but also to secretly instruct them on the subject of espionage…

If you like mystery and spies, you will enjoy Gail Carriger’s book. I would rate it a 9.5 out of 10, because it was such a captivating novel. I can’t wait until its sequel, Curtsies and Conspiracies, comes out on November 5th.

2 thoughts on “Book Review: Etiquette and Espionage, by Gail Carriger”