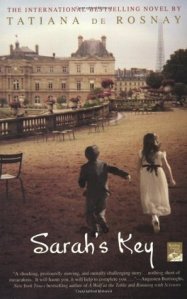 In this book, Sarah’s Key, by Tatiana De Rosnay, you learn a valuable lesson about being grateful for what you have.

This book is about a girl named Sarah and she gets taken away with her mother and father off to a bike stadium. They had to go because they were Jewish. Before they leave, Sarah locks her little brother in a secret cupboard and promises to come back. The French Police take them away so she feels as if she is safe because it was not the Germans.

Then on the other side of the story, you learn about a women named Julia. She works for a magazine and is assigned to write an article about the roundup of Jewish people. She is married to a man whose family lived in the apartment Sarah lived in after she was taken away. She learns about Sarah and their stories connect, and Sarah sticks with her forever.