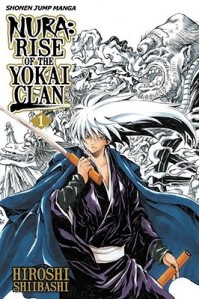 Rikuo Nura is an ordinary eight-year old, except for one thing. His grandfather is Nurarihyon, the supreme commander of all yokai (a Japanese kind of monster). So, he’s an average kid until night falls, and then he transforms and leads an army of yokai.

Since he’s the supreme commander’s grandson, many of the yokai in his clan expect him to take up the title of third supreme commander. However, there are others in the clan that aren’t so happy about him possibly becoming “the third,” especially Gagoze, a child-eating yokai.

The one day Rikuo doesn’t take the bus to school, Gagoze tries and fails to kill Rikuo by causing rocks to fall onto the school bus that normally took Rikuo to school. When Rikuo learns that his bus was hit by rocks, he transforms, and leads the main house of the Nura clan to rescue his friends. Once he gets there, and Gagoze realizes that he had failed to kill him, Gagoze decides just to kill all of Rikuo’s friends. However, Rikuo succeeds in rescuing his friends and defeating Gagoze. Then he declares that he will become the third.

Unfortunately, the daytime or human Rikuo has no intentions of becoming the third, and has no memories of when he transforms into his yokai form. Four years later, the Nura clan still cannot make the decision of naming twelve-year old Rikuo as the third, because he continues to live a human life. And all of this happened in just the first chapter!

I loved this manga series from the moment I picked it up and started reading. It contains two of my favorite things in a book: comedy and action. One part that I think is really funny is that one of the minor characters in the story is named Natto-Kozo, and for those that don’t know, “natto” means fermented soybeans. On a scale from 1 to 10, I would give it a ten. Great storyline, fantastic art, everything about this series is awesome. I can’t wait until I get my hands on the rest of the books.