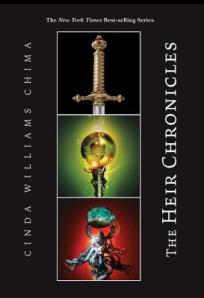 Have you ever wanted to be able to see the future? To be able to do magic? Fight with magic swords? Talk people into giving you things, heal the toughest of wounds and illnesses, or take power and energy out of other people?

The ones who can are called the Weir. They have five guilds, all with separate powers and abilities. The sorcerers can heal any wound and can work with amulets and other material magic. Enchanters can talk people into giving them anything, or even doing something for them. Warriors are the brawn of the guilds and the weapon wielding Weir. The seers can see into the future, and can sometimes control it, too. Wizards, the most powerful of all, shape magic with words and have enslaved the other guilds into obeying them and giving them authority.

This four book series, which includes The Warrior Heir, The Wizard Heir, The Dragon Heir, and The Enchanter Heir, are stories of how these guilds battle against one another and fight for equal power amongst all the guilds. The main characters include Jack and Ellen, who are warriors, Will and Fitch, who are AnaWeir or non magical, Linda and Jonah, who are enchanters, Leander, Seph, Jason and many others who are wizards, and Madison, who is an elictor. Elictors draw magic out of other people to use it themselves or to stop their opponents.

I am currently reading the fourth book of the series, The Enchanter Heir, which is about a young enchanter named Jonah. I haven’t gone too far into the book now, but right after I finish writing this I am going to go and read it. If anyone has read these books please post a comment below about which guild you would be a part of or if you liked these books!