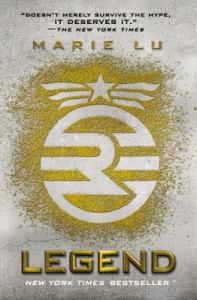 As we all know, traveling into the future is not easy. However, Marie Lu’s book, Legend, goes against this theory, by letting us interpret her version of a dystopian Los Angeles. Told in the perspective of two characters, this book introduces two different sides of society and how changes made in the present affect the future.

Day, from the poor areas of Los Angeles, is the government’s most wanted criminal. With cunning skill and determination, he steals medicine to treat his brother from a miserable plague that is killing civilians. June, on the other hand, is the government’s prodigy, whose brother appeared to have died at the hands of Day. To avenge his death, June goes out on a mission to hunt down this criminal and bring him to justice. However, the two enemies unexpectedly join together as allies through a little romance and shared curiosity of the government’s secrets. Together they realize that the government has been corrupting all of its people, and June and Day are only pawns in the entire plot.

Similar to that of The Hunger Games and Divergent series, Legend is set in a futuristic vision of the United States of America. Marie Lu really emphasizes her understanding of the book’s setting by describing the whole scene of the dystopian world and offers a little background to describe what happened between our present time and book’s future setting. In addition, the Legend series is much more intriguing to read than other dystopian series because the novella itself is easier to relate to and is as action-packed as The Hunger Games. Even better, the action occurs in the busy streets of LA rather than an enclosed arena. On a scale of one through ten, this book is a nine and a half because its description is wonderful. There are some cliffhangers, especially leading into the next books of the series (Prodigy and Champion). I would recommend this book to those who have read The Hunger Games or Divergent and would love to compare the stories and share what you think in the comments below!

Legend is available for check out from the Mission Viejo Public Library.