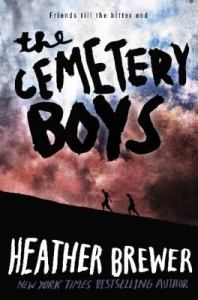 Stephen’s life is already bad enough, with his mom in the hospital and his dad going broke from paying the bills. It gets worse when his dad tells Stephen that the two of them are moving to the small town his dad grew up in. No one wants to live in Spencer, let alone move there, so to Stephen is very bad news. They are forced to live with Stephen’s grandmother who despises the very idea of them both. As much as they hate to live there, his dad promises it is just temporary, saying that he just needs enough time to get a job and get back on his feet. Then, they can leave Spencer for good. But as weeks drag into months, it’s clear the two won’t be going anywhere for a while.

However, things begin to get better when Stephen meets punk girl, Cara, who he may or may not have a huge crush on and her interesting and protective twin brother, Devon. As nights hanging out in the harmless “Playground”, also known as the town’s cemetery, Stephen starts to realize there is much more going on here than just a few drinks with some friends and he begins to suspect Devon may not just be a regular friend but a leader, leading them all to a fatal end. Stephen wants more than anything to get his life back to normal, or as normal as it will ever be. But what he doesn’t know is that nothing normal can come out of his move to Spencer, Michigan and that he may never know normal again….

I could not put this book down no matter how hard I tried. This amazing thriller will have you on the edge of your seats with every word. And the ending was something I never expected! Everything in this book was just so fascinating, that I couldn’t wait to find out what happens. Because of some mature content, I would recommend this to readers 13 and up. Be sure to look out for this book at the library. The town legends and beliefs will make you wonder that if you were there, would you believe them too?

The Cemetery Boys is available for check out from the Mission Viejo Public Library.