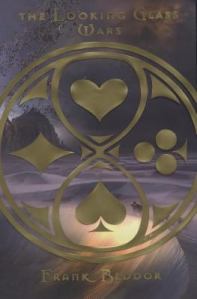 Have you ever wondered if Wonderland in Lewis Carroll’s book, Alice’s Adventures in Wonderland and Through the Looking-Glass was real? In Frank Beddor’s book, The Looking Glass Wars, it is. Alyss Heart is the princess of Wonderland with her mother, Queen Genevieve, and her father, King Nolan. Queen Genevieve is the supporter of White Imagination and has a bodyguard by the name of Hatter Madigan. This story begins with the royal family and the Wonderlanders celebrating Alyss’ seventh birthday. The Queen foretells that Alyss will be the strongest queen of Wonderland because of her powerful imagination. During the party Alyss’ friend, Dodge Anders, takes her out of the palace and takes her to a lake called “The Pool of Tears.” Dodge says that if a person jumps into the pool, he will go into another world, which is our world, but no one has ever returned.

After arriving back to the party, Alyss sees a cat running into the main hall where everyone was. It suddenly turns into a ferocious Cat and heralds the arrival of Redd Hearts, Queen Genevieve’s sister and Alyss’ aunt. An army of her card soldiers destroys Alyss’ home and the Queen’s general Doppelgänger and Hatter jump into action to fight against the enemy. In all the fighting Alyss sees her mother imagining weapons to battle the card soldiers around her. Her mother gives an order to Hatter to get Alyss away from the horrid battle. Hatter takes Alyss to the Pool of Tears and jump into the lake before Redd’s assassins can reach them. In the water Alyss loses Hatter’s hand before arriving to our world, leaving him to search for the princess and find a way back to Wonderland. Will she be able to ever get back? Also, will Hatter be able to find Alyss? To find out, read this wonderful story.

I truly loved this book. It was a page turner and I couldn’t stop reading. Everything about the book was amazing, the plot, the characters, ans the suspense. This is a trilogy and the next book is Seeing Redd. I really hope you will read this book!

The Looking Glass Wars is available for check out from the Mission Viejo Public Library and Overdrive.