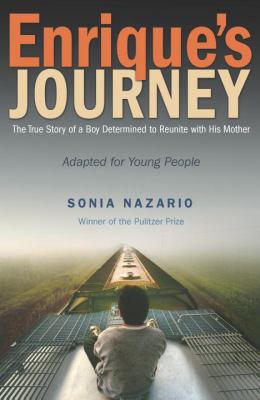 To be honest, this book had been sitting on my shelf for a while before I thought to read it. To me, it seemed interesting, but I wasn’t so sure. I was used to fast-paced, dystopian novels, not true accounts. So when I picked it up and saw a map on the first page, I was skeptical.

But of anything that I’ve read recently has a deep meaning, it’s this. This story follows Enrique, a young teen from Tegucigalpa, Honduras. When he was five years old, his mother, Lourdes, left him to go to the United States, in hopes of getting a job and helping the financial situation of her family. Her plan was to be gone for only a short time, an idea which was further fomented by pictures of rich cities in the United States. So when she arrived in the US, her plan did not go as she expected.

For young Enrique and his sister, Belky, it was hard to see their mother so far away. They could not imagine why she would want to leave them. Added to that was years of false promises of her return, and the children were not happy. Enrique was affected most of all. His life became difficult in the Honduras. He decided not to go to school anymore. He sniffed glue and was high more often than not. His family, and his girlfriend, worried about him.

At this point, Enrique cannot be stopped. He has decided to hitch-hike his way all the way to the United States, on top of trains and through the countryside. This is an extremely dangerous undertaking, because of the threat of gangs and migrant police and general disdain for migrants, not to mention that riding atop a moving train is not exactly the safest way to travel. This story follows Enrique as he makes not one but eight trips to try to get to the Mexican-American border, and the hardships and joys he experiences along the way.

It was truly eye-opening to read this story. In light of political comments about immigration in the United States, it was interesting to see the argument from the other side. I never knew it was this difficult for people to come to the US, where they aren’t even welcomed half the time. It was honestly depressing to see how cold and selfish people can be towards other people, especially after seeing how difficult life was for people in these situations. It certainly puts my experiences into perspective.

On a related note, the author of this account, Sonia Nazario, actually made this trip herself, so she could make the story more realistic, which shows a lot of dedication to her job. So not only am I in awe of Enrique’s courage, but also of Nazario’s selflessness and willingness to do anything in order to share such an important story.

Enrique’s Journey is available for checkout from the Mission Viejo Library. It is also available to download from Overdrive.