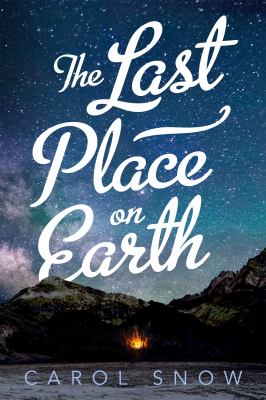 The Last Place on Earth by Carol Snow is about sixteen-year-old Daisy’s search for her missing best friend, Henry Hawking. Described as impish and ingenious, Henry has been Daisy’s friend ever since they started high school. After Henry misses a day of school, Daisy does not think much of it because Henry does not like going to school, and his parents let him stay home. He does not come for a few days, making Daisy suspicious.

She goes to the Hawking’s’ home, and in Henry’s room she finds a note saying, “Save me.” Determined to find Henry, Daisy ventures into the California wilderness using coordinates Henry had sent to her. She finds Henry, but it is not a happy reunion like she expected. The plot takes an unexpected twist, causing Daisy to have even more questions.

The plot line of this book intrigued me; it was the reason I picked the book of the shelf. Despite the great premise of this plot, it fell a little flat. Daisy was a great main character; she was the right balance of sarcastic and nice. Also, I admired how she was so willing to go into the woods by herself in order to save her best friend. The Last Place on Earth had a lot of potential, but it did not reach that potential. Even though the middle fell flat, the ending was not too bad. I would recommend this book for anyone looking for a quick and entertaining read.

The Last Place on Earth is available for checkout from the Mission Viejo Library.

2 thoughts on “The Last Place on Earth by Carol Snow”