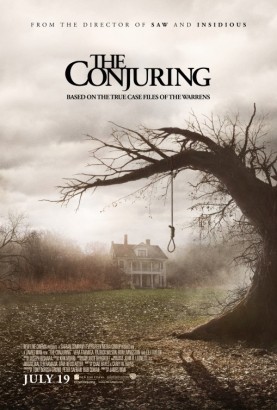 The Conjuring, supposedly a true story, is about a family in the 1960’s that move into a new house and start to experience supernatural occurrences. The plot of the movie focuses on the strange and frightening things happening to the family and the couple who tries to help them because they “hunt” ghosts and demons. The movie starts off with a peek into another horror film, Annabelle, which led me to believe I was watching the wrong movie at first. After the clip ends, the scene shifts to a classroom where the couple teach people about the beings they hunt to stop them from haunting and killing people. Here, they meet the mother of the family and learn about the things living in her house. It’s interesting because there isn’t just one ghost but many spirits haunting the land. After the team of hunters settle into the house, more supernatural action happens which is scary to see at first just because this movie isn’t very predictable, which is one of the things I like about it.

An interesting addition to the characters is that the wife in the couple has a sort of sixth sense which allows her to sense the entities around her, only making her more fun to watch. With most scary movies, you can tell when the scary thing will pop out and what it’s going to be, but this story made it more exciting and thrilling for me. I liked the element of surprise, especially because only certain members of the family seemed able to see the entities at first so you never knew when they would show a scary ghost or not. Lastly, with the ending of the movie, I thought it wrapped up well and left me, not only satisfied with the story, but able to go to bed and not worry about what could be hiding in my closet. I would recommend this movie to anyone who can handle scary scenes in the dark. It’s one of the best horror movies I have seen so far, not too scary but good enough so you’re not bored or expecting what’s to come.