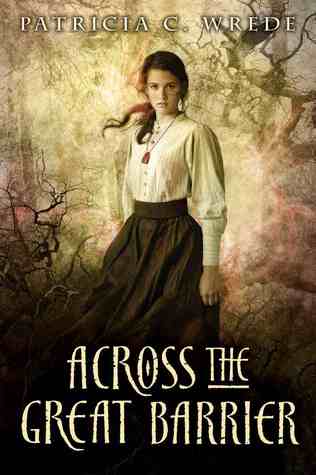 Across the Great Barrier, by Patricia C. Wrede, is the second book in the Frontier Magic series. The novel is set in an alternate universe—the American frontier is being settled and explored, but there’s magic. Eff, a thirteenth child, has always considered herself unlucky, and therefore has never really tried learning her spells, but helps out at the menagerie where she takes care of magical and non-magical animals. Eventually, she crosses the Great Barrier, where the Professor finds something extremely interesting. This is a pretty dry run of it, but the book was more interesting, I promise.

When I picked this book up I didn’t realize that it was the second book in a series. Oops. Still, it was really good, and the author gave enough information about the main events from the first book that I could make sense of things. The book is told from Eff’s point of view, so it doesn’t go into too much detail about things that she doesn’t consider important, and spends more time on things that she’s interested in or that are important to her. I like this book because it has a good plot line and gives a new way of looking at the American frontier when it was still being settled. There were no Native Americans in the book, so I’m not sure if I missed something in the first book or if they just aren’t there. The end of the novel doesn’t give complete closure and pretty obviously sets it up for the next book because not everything gets resolved.