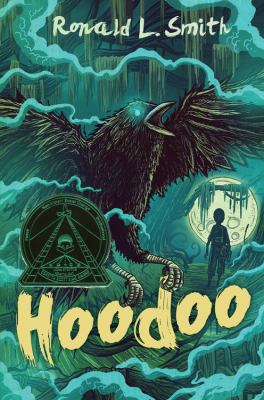 Hoodoo is a great book and I love it. Hoodoo is about a kid who was born without a mom or dad, because they died, and is instead raised by his grandma. Hoodoo is the kid’s name, an African-American boy with a heart-shaped birth mark around his eye. He has to defeat a demon from taking over his town, which was one of my favorite parts of the book.

Another interesting part of the book was his visit to a fair with his friend Bunny. They went to a fortune-teller booth and got Hoodoo’s fortune told. She said to trust the crow and stay away from the stranger. A few days later Hoodoo met a crow that spoke the same words about keeping away from the stranger. Later Hoodoo went to Mrs. Snuff’s house, who was the fortune-teller, where he met and fought the stranger. As it turns out, the stranger wanted Hoodoo’s left arm, saying “Mandigore and the one that did the deed.”  Why would a demon want a kid’s left arm?  Well, you will have to read the book to find out!

Even though demons wanted Hoodoo’s left arm, he lived a normal life. His grandma went to work to clean white people’s’ houses.  He did chores and stuff for his grandma. Hoodoo also liked to visit his cousin Zeke and help him at his job. His family also could “conjour”, but he couldn’t because he didn’t have the magic.

I think this is a good book for readers who like magic and adventure. The reader should know that this book starts off  slow but picks up pace in Chapter 10. I like this book because it has a lot of mystery too.

Hoodoo by Ronald Smith is available for checkout from the Mission Viejo Library.