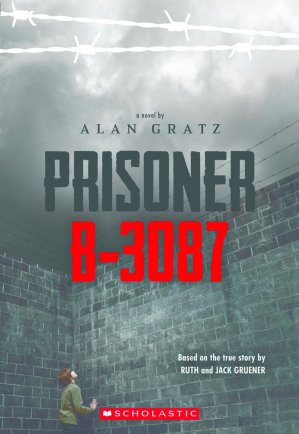 Prisoner B-3087 is a true story of Jack Gruener. Alan Gratz was the person who made Gruener’s story into a novel. The novel tells a tale of Yanek, a boy who was put in a concentration camp.

I choose this book because I needed something to read. When I found it I saw that it was about the Holocaust. I thought that it would be very interesting and it was.

I haven’t read every Holocaust story but this one was very deep. The way Gratz wrote this was very in depth. That is what I think that more of these stories need. They need a more detailed story.

It really made you feel like you where there. Right next to Yanek in the concentration camp. I also learned many news things about the Nazis. Like how they hired convicted criminals to be Kapos in the camps. At the start of the book Yanek was a boy about 10. He was just a innocent boy. Then when the Nazis came he was coming on 11 or 12 maybe. Then when they took him he was going on 14.

The important thing about 13 is that it means its time for your barmitzfah. Before they took him and his uncle had his barmitzfah. Now they couldn’t have had it in there house or else they would’ve been shot. What they did was they had it in the basement.

Another thing that shocked me was the cruelty of the Nazis. There was one point of the book where they would make prisoners move huge rocks for no real reason. They just wanted to see the Jews suffer. In the novel you could see how Yanek changed over time. In the beginning of the novel he was a innocent little boy. At the end of the novel he was a grown man who didn’t fear death.

I thought this book was great and I wouldn’t mind reading it again.