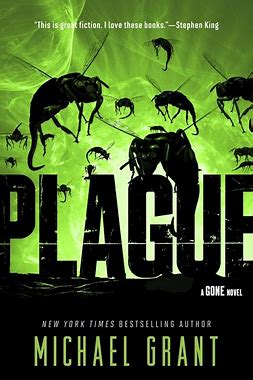 Imagine a world in which everyday people gain supernatural abilities. A world without any adults or rules. A world where animals are starting to mutate horribly. A world surrounded by an impassable barrier, stopping anyone from entering… or getting out. Welcome to Michael Grant’s FAYZ, or Fallout Alley Youth Zone.

Every human above the age of 15 have disappeared, leaving the kids in a world that’s theirs for the taking. In this fourth installment of the Gone series, Drake has returned, bringing with him a terrifying concept of the perfect killing machine: beetles. They start off as invisible threats, but the true horror begins when you see a small pair of mandibles poking through the inside of your skin. They slowly begin to grow and emerge from your body, secreting a numbing liquid as they do so. When incubation is complete, they burst from inside you and eat your remains.

As if this and Drake weren’t bad enough, kids are coughing up a lung… literally. A plague is wiping out the population of Perdido Beach, a sickness that nothing can heal. Tensions are high as the fight for survival sweeps up some new faces and old, exposing new problems, and new solutions.

Plague by Michael Grant is available for checkout from the Mission Viejo Library.

2 thoughts on “Plague by Michael Grant”