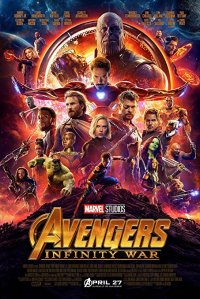 I went into the theatre to watch Infinity War super excited because I honestly just wanted to see how Marvel would finally kill some of its superheroes. And well, overall ways the movie kind of disappointed me. I still enjoyed the movie but after all of the hype, I was just expecting something different.

The entire movie was basically just action. It started with minimal setup and the rest of the movie seemed like action and violence with a small amount of storyline woven in. I just thought that with everything that Marvel had to work with, they could have written a better storyline. It wasn’t a bad storyline it just seemed to be very similar to all the other superhero movies that had been made, just blown up to a larger scale and the special effects were great. But, the amount of action was so overkill that after a while it almost got boring.

To really understand this movie, you really had to watch all the other Marvel movies that had recently came out because there was small pieces of the storyline that were explained in the other movies that the movie makers had expected the audience to know. Which, I think was kind of a good and bad thing. I found it cool that they could tie everything together but, the parts explained in the other movie where so minimal that I feel like it was more of a money grab. It was also kind of hard to remember all these parts because I hadn’t watched some of the other movies in a while which, made some of the storyline kind of confusing. So, I would definitely suggest going back and watching the other Marvel movies before seeing Infinity War.

The best part of the movie, for me, was the fact that some of the superheroes finally died. I know that they aren’t probably going to stay dead, but it was about time that Marvel killed some of their superheroes. Though, the way they killed them was kind of disappointing.

Marvel did make us wait a long time for the end credit scene though.

I would still totally recommend this movie especially if you’re into superhero movies.  It was still a good movie and I had a lot of fun watching it.