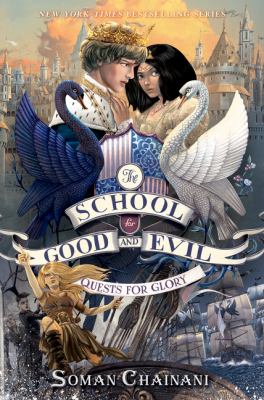 Just a quick background on the world: The School for Good and Evil is set in a fairy tale world and has two school within it: a School for Good and a School for Evil. Based on their nature, the children are separated into these two schools. When each student reaches their fourth year, they are assigned a quest, and the Storian (and enchanted pen) writes and illustrates their adventures as a new fairy tale. King Arthur of Camelot, Cinderella, and many more were students at the School for Good and Evil. The characters who were introduced in the first book of this series, Sophie and Agatha, are now in their fourth year.

The fourth-year pupils are off on their assigned quests, but the quests do not seem to be going as hoped. Tedros cannot lift Excalibur to take what he thinks is his rightful place as king, Agatha is not as happy as she’d hoped in Camelot, and from the looks of Professor Dovey’s (Dean of the School for Good) magical quest map, the other students are not doing well either. A mysterious force seems to be working against the success of the students’ quests, and its ultimate goal becomes more and more apparent with its every move: Tedros’ place in Camelot. Professor Dovey begins to realize that perhaps the quests the fourth-year pupils have been given are not their real tales.

I had read the first three books in The School for Good and Evil series about a year ago, and I had forgotten how full of humor and artful drama Soman Chainani’s writing is. The characters he creates are so vivid, unique, and enjoyable to read about. If you have not read this series, I would suggest it if you like books based on fairy tales (many of the students at the School for Good and Evil are children of famous fairy tale heroes and villains). This book was an exciting, magical, and humorous read which I’m sure fans of the series will enjoy.

Quests for Glory by Soman Chainani is available for checkout from the Mission Viejo Library.

2 thoughts on “Quests for Glory by Soman Chainani”