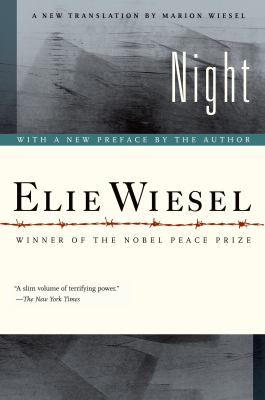 Night by Elie Wiesel is a terrifying story of the Holocaust during World War 2. Elie was born in Sighet, Transylvania. He lived a normal age until the day that he and his family were taken to a concentration camp formerly called Auschwitz. There he is separated from his mother and sisters. He is told to lie about his age and job in order to survive.

After he tells a guard about his age, he is led away with his father. Some days after, they are taken to Buna, a work camp. They work long hours and are very malnourished. Due to the harsh conditions, the Jews must look after one another. This behavior doesn’t last long, and soon all the Jews care about is that they survive. This pushes many of them to commit horrific crimes for extra rations of bread. They quickly lose faith in God and no longer pray. This brings on a worse despair. After some months of labor, the prisoners are soon to be liberated by the Russians. Because of this, the Germans decide to move the prisoners. They are forced to march through a snowstorm to another concentration camp called Gleiwitz. Once at Gleiwitz, they are crammed into cattle cars. All 100 prisoners that hadn’t died were tightly packed against one another. Most cannot take anymore pain and die on the train. Once the train stops at Buchenwald, only 12 prisoners get off of the train. Soon after arriving, Elie’s father dies of dysentery on April 11, 1945. After experiencing so much, this breaks Elie and he is transformed into only a skeleton of a man.

Night by Elie Wiesel is available for checkout from the Mission Viejo Library. It can also be downloaded from Overdrive.

1 thought on “Night by Elie Wiesel”