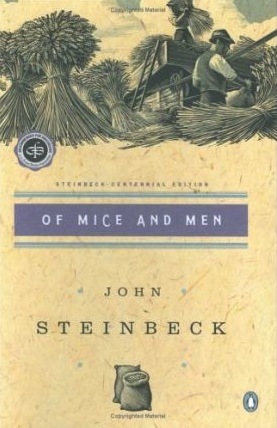 Of Mice and Men by John Steinbeck is about George Milton and Lennie Small trying to find a job and settle. The reason that this is such a difficult task is because Lennie has what seems to be memory loss. He constantly forgets what George tells him. He also doesn’t understand what is right compared to what is wrong.

This book tells of George and Lennie trying to find work in Soledad. They go to a ranch and speak with the boss before being told when to start working. When they are shown where they will sleep, they encounter the boss’ son Curley. Curley immediately starts trying to pick a fight with Lennie. As soon as Curley leaves, George warns Lennie about avoiding Curley at all costs. Curley’s wife, who Lennie is attracted to upon seeing her, is also a big problem.

After working for some time and getting to know other ranch hands, George and Lennie believe that they may be able to finally buy a house just for them. However, one day Curley’s wife finds Lennie alone and starts a conversation with him. She tells about how she could have gone to Hollywood and about her hair. She lets Lennie feel her hair, and he starts pulling on it. Curley’s wife cries out in pain, so Lennie covers her mouth out of fear of getting in trouble. He pulls on her hair more and more until he accidentally snaps her neck. When Curley finds out he goes to kill Lennie. George gets to Lennie first, and painlessly kills him so that Curley wouldn’t shoot him and let him bleed to death.

2 thoughts on “Of Mice And Men by John Steinbeck”