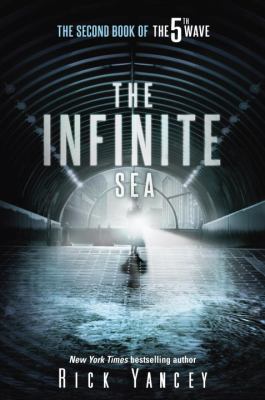 The Infinite Sea by Rick Yancey is the second book from the 5th Wave series. This book focuses on everything that happens after the explosion of Camp Haven. Cassie, Ben, Dumbo, Ringer, Poundcake, Nugget, and Teacup are all holed up in an old hotel. They have nowhere to go and are running dangerously low on supplies. Ringer refuses to believe Cassie about Evan Walker and how he survived the explosion at Camp Haven.

Tired of staying in the hotel, Ringer and Teacup set off to explore and look for caverns to hide in. After they have been gone for an unusually long time, Ben starts to worry.  Then Evan appears and sends everybody into a panic not knowing whether they can trust him. Then they hear the sounds of a helicopter over the hotel, which makes their worries worse. As the helicopter goes farther and farther away, a child appears in the hallway. She repeats over and over saying her throat hurts. She is taken into a hotel room to get rest and once inside, they see that her throat is extremely swollen. They look inside her throat and find what has caused it to swell. The Others had inserted a bomb into her throat which would detonate when it detected carbon dioxide. They quickly take the bomb out of her throat and leave the hotel. Meanwhile, Ringer had been captured by Vosch and was being implanted with the 12th system. She kills the nurse who is taking care of her and escapes with Teacup.

The Infinite Sea by Rick Yancey is available for checkout from the Mission Viejo Library. It can also be downloaded for free from Overdrive.

1 thought on “The Infinite Sea by Rick Yancey”