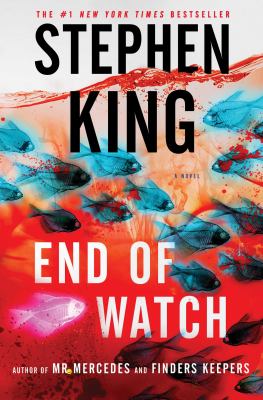 Only a mind like Stephen King could catalyze such strange, thrilling storylines and concepts as those presented in his 2016 novel, the third and final installment of the Bill Hodges trilogy, End of Watch. I admit, I began reading the novel blindly with no background on the previous two installments of the series but was appeased by the fact that King was extremely articulate in giving background on the origins of the trilogy, which easily made End of Watch a more enjoyable and smooth read.

End of Watch features a diverse array of characters, centering on retired Detective Bill Hodges as he juggles monumental health issues and an even more monumental case: a large stretch of suicides sharing a single common link, a handheld video game console with a strangely hypnotic effect. Hodges and his makeshift team — his current and former partners, Holly Gibney and Pete Huntley, and his lawnboy-turned-friend, Jerome — follow the sinister paths taken by Brady Hartsfield, the culprit of the so-called “Mercedes Massacre” that King created for the first book of the trilogy, Mr. Mercedes.

Through pages of suspense and moment after moment of action and mystery from King’s wild imagination, to the saddening farewell of the final pages, End of Watch brings the classic Stephen King “stranded in the murk” feeling, leaving us wandering stone-blind and never knowing when the next plot twist or mind-bending connection will strike. The premise made for King’s legendary style without a hitch and makes us consider the possibilities before swiping to play a video game again.

Upon closing the final curtain and concluding my journey with the characters in the book, I was struck with two very different realizations: the frightening reality of suicide cases across the globe and the authentic ties between friendships. Every character had a unique interaction with each other, which only made the story even more realistic, and consequently, all the more chilling.

So be careful next time you play a new game of Fishin’ Hole — or read a Stephen King novel — you might find it hypnotizing.

End of Watch by Stephen King is available for checkout from the Mission Viejo Library. It can also be downloaded for free from Overdrive.

2 thoughts on “End of Watch by Stephen King”