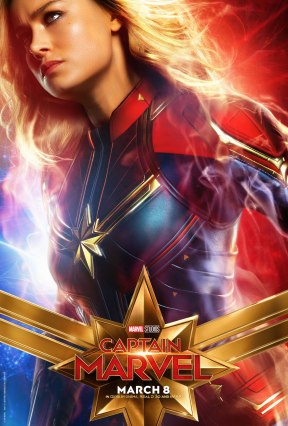 Captain Marvel actually exceeded my expectations. I went into the movie thinking that it would be extremely hyper-feminized in a way where it would actually take away from the movie especially, because of all the controversy surrounded the main actor Brie Larson. However, this movie did represent feminism in a way that was not annoyed and seemingly forced unlike many other movies that have been coming out recently. Which was nice. It showed the empowerment of women but did not push the idea so much that it took away from the movie.

The movie was by no means amazing or anything revolutionary or new. But, it was a pretty good average superhero origin story. It had some good actions scenes mixed in with an okay story line. Though nothing was truly that originally or different from any other super hero movie that has come out. There was a pretty cool plot twist which, I am not going to ruin which did make it a little bit more interesting. But, many of the main concepts where just like any other movie, the main character gets in a battle, looses, so then she goes back and finds her roots and all of a sudden she is a lot stronger. It is nothing new.

Overall though, the movie was entertaining and it was nice to see a woman taking a lead role in a superhero movie and showing the empowerment of woman and what they can do. It was cool to see that women where being represented in action movies and not just romance movies. The actions scenes where also very well done and the music chosen for the movie was amazing.

This movie is a great one to see to just pass some time and have some fun with friends or family. It is enjoyable to watch and is relatively engaging. I would suggest this movie to anyone who just wants have to have a movie night with others.