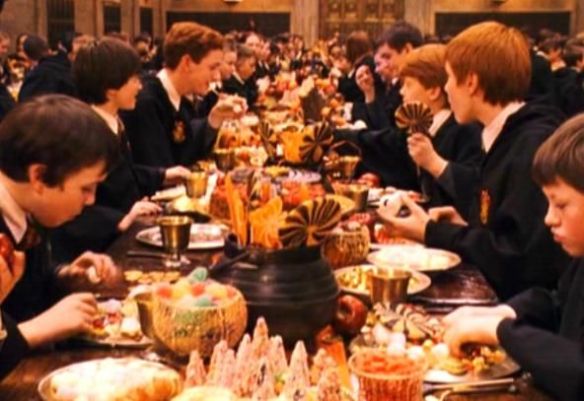 There are many reasons I love to read: the characters, the settings, the story … and sometimes the food. Not that it’s the force that drives me when I pick up a book to read, but I enjoy reading about what the characters eat. Maybe it’s because the little culinary details make the story so much more immersive, or because seeing the characters eat makes them more relatable. Ultimately (however silly it may seem), food can add extra depth to a story.

In her Harry Potter books, J.K. Rowling adds little comments about what the characters are eating, which is one of the many reasons I enjoy reading her stories. Here is some of the food mentioned in Harry Potter and the Philosopher’s Stone that may or may not interest you.

“Stale cornflakes and … tinned tomatoes on toast” (Rowling 50): This is the breakfast eaten by the Dursleys and Harry during Mr. Dursley’s failed attempt to evade the senders of Harry’s Hogwarts letter. This slightly dreary meal matches the mood of Harry and the Dursleys on this random, unplanned trip.

Hagrid’s sausages: When Hagrid appears at the little shack where Harry and the Dursleys escape to, he roasts some sausages over the fire and offers them to Harry. After sleeping on the floor of a shack in the middle of a storm, this warm food must be a relief to Harry–a relief which parallels what he feels during his departure from the Dursleys into a wizarding world that treats him with warmth.

Chocolate and raspberry ice-cream with nuts: Harry is given this ice-cream from Hagrid after he first meets Draco Malfoy. Despite the doubtless deliciousness of this treat, Harry eats it a bit unhappily as he ponders his unpleasant conversation with Draco (but he soon learns not to place value in Draco’s statements).

Pumpkin pasties: The pasties are among the assortment of sweets Harry purchases from the trolley witch on his first journey to Hogwarts. They have a part in the beginning of Harry’s friendship with Ron, for it is a pasty that Harry offers Ron in exchange for one of Ron’s sandwiches. A pasty may also be the first wizarding sweet Harry tastes.

In J.K. Rowling’s stories, the food assists in conveying the characters’ emotions along with adding interesting facts for the readers. Knowing what the characters are eating adds a new layer of complexity to the books.

2 thoughts on “Fictional Food: Harry Potter and the Philosopher’s Stone”