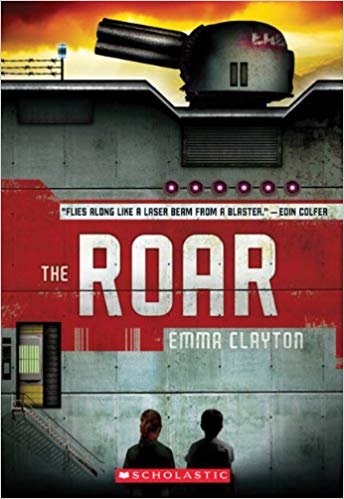 The Roar by Emma Clayton is a dystopian science fiction book that re-examines what it really means to be human.

In the (not so) distant future, the entire human population is squeezed into a third of the land that it once occupied, behind an impenetrable gray wall. Society’s distinctions are more emphasized than ever, with all the rich living in the Golden Turrets, and those not so fortunate shoved underneath, deprived of sun and water, into the Shadows. An animal plague has destroyed the rest of the Earth.

Hybrid Mika Smith has his doubts about everything, even about his sister Ellie’s suspicious death. But when a mysterious dream, a podship competition, and The Roar come into play, Mika must prepare to rethink everything he has ever known about the dying and corrupted world he lives in.

One quote from the book really struck me: “A few people started riding bicycles and others reused their plastic bags and meanwhile Earth was gasping its last, desperate breath.” This quote really summarizes what the main idea of this book is. In this book, the Earth has been polluted beyond recognition, and humanity is desperately warring against nature, believing that only one can survive. This quote is gripping on an intrinsic level, making us question the validity of our motives, however well-intentioned they may be, and raises an inquiry into the basic human nature of greed and power. It stresses the need for substantial action and unity against some of the pressing problems facing our world.

The Roar by Emma Clayton is one of the best books I have ever read. The plot is just interesting enough to not be boring but suspenseful enough to be a nail-biting thriller. Although the plot is a bit too slow at times, the book still remains an excellent read. Emma Clayton has created a fictional masterpiece but added perfect undercurrents of real issues like climate change that pressure us all today.

1 thought on “The Roar by Emma Clayton”