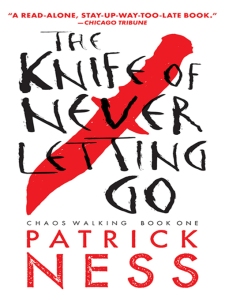 The Knife of Never Letting Go follows 12-year-old Todd Hewitt and his companion Viola on their journey to reach New Haven, a town at the other end of the world. The history of their planet is one of the grim desolate conditions, which Todd learns early on as he has raised in Prentisstown: a town where every man can hear each other’s thoughts and all the women died of a mysterious disease soon after Todd was born. The youngest boy in the town, he is exactly one month away from becoming a man when his guardians, Ben and Cillian, send him away into the swamp with no explanations, and only a warning that everything he knows about the history of Prentisstown and the New World is a lie. In the wilderness, he meets Viola, a young girl that survived a space shuttle wreck meant to scout the area for new settlers. Together, along with Todd’s easily distracted yet loyal dog Manchee, they run and fight to survive in a world they soon realize is nothing like they were told.

Patrick Ness, the award-winning author of A Monster Calls, depicts the story through the thoughts of Todd, his inner monologue and Noise (men’s broadcasted thoughts in the New World), and the chaotic noise of the other men around him. He displays the emotional connections Todd makes with Viola and his guardian Ben, as well as the confusion and horror when slowly realizing the secrets of Prentisstown, all while hiding a dramatic bombshell of death and despair that we only get to read and imagine towards the end of their journey. Themes of maturity, love, death, and hope scatter the novel as the characters grow, leading to a beautiful final destination that feels all but complete, as plans are derailed for us to wait in anxiety for the next installment.

Having read this book for the first time several years ago, I was excited yet worried to read it again; the book is a towering and intimidating 500 pages, but is impossible to put down. The twists and turns shocked me once again, and I thoroughly enjoyed my second read. I look forward to uncovering the secrets of the rest of the trilogy in the coming months.

The Knife of Never Letting Go by Patrick Ness is available for checkout from the Mission Viejo Library. It can also be downloaded for free from Overdrive.