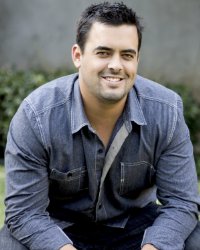 Author and former Navy SEAL, Chad Williams, visited Mission Viejo in March, and two members of the Mission Viejo Library Teen Voice took the initiative to interview him about his Navy SEAL experiences and the faith journey he shares in his memoir, Seal of God.

Q: Why do you believe that being a Navy SEAL always stood out to you?

A: “Being a Navy SEAL stood out to me because I saw it as the most difficult military training in the world. In my mind, it really was top of the mountain and I see being a Navy SEAL as being a part of the most elite. And that was something I wanted to aim for. I didn’t want to be just mediocre- I wanted to do something really big.”

Q: How did you feel when you were working the gun when your team was ambushed capturing the terrorist in Iraq?

A: “My initial thought was, ‘Wow, this is for real. If I get hit by one of these bullets that are coming at me, it’s not like a training exercise where you are just going to feel a sting from a simulation round. But these bullets are real, and could take an arm off, and in a split second I could be standing before God all of sudden.’ I  do remember thinking about some of the other SEALs that were on the ground, getting shot at, hoping ‘I hope that none of these guys get hit, because I know where I’m going when I die, but for some of them it is kind of uncertain.'”

Q: What are your feelings now toward your team-members of Team 1 who ostracized you?

A: “I have nothing but love for those guys; nothing but forgiveness is what I feel towards them. If  I saw one of them, I’d go running up to them on the street, and just tell them, ‘Hey man, I love you guys and no hard feelings,’ and I would want to share the gospel with them.”

Q: Based on your experience, what is your advice to the teen youth of today?

A: “I think the most important question that somebody could answer is, ‘What do you make of the person of Jesus Christ?’ That’s what’s really going to matter. Just like Jesus says in the Word, ‘Everyone on the side of truth listens to me.’ So you can live your life aiming at treasure here on Earth– going for the occupation, trying to make lots of money, get the big home– but when you die, none of that is going to matter. In fact, Jesus says that ‘You are not to lay out for yourself treasures on earth where moth and rust destroy, and where thieves can break in and steal, but lay out for yourself treasures in Heaven, where neither moth nor rust can destroy, and where no thief can steal.’ The most important thing is to know Jesus Christ because he is the only one that can truly save us from the consequences of our sin. And so to know him, forever enjoy him, and make him known. That’s my biggest advice.”

Q: So your book, Seal of God written by you and David Thomas, is about your journey to Christianity, how do you hope that this will affect people?

A: “The most important thing of all is that I hope the Gospel affects people, and at the end of the book, I hope they gain a greater perspective of what sacrifice is all about as they learn of soldiers who have laid down their life for the sake of freedom. And greater than that– about the sacrifice Jesus Christ made at the cross, so that we could have freedom from the eternal consequences of our sin.”

Q: What was running through your mind when you were writing this and recalling all of these events?

A: “That was really tough, bringing up some of these old thoughts because for a long time I pushed them out of my mind, and so it was a little bit of struggle. I remember having really bad nightmares about it, but at the same time, it was an opportunity to not let Scott’s story fall through the shades and sands of time, but to use his story as a platform to share the gospel. So ultimately, it does have a greater meaning and greater purpose to it.”

Q: You were raised in a Christian family, and so many people in the US are Christian. Why do you think you met with such hostility from your own Seal Team?

A: “Well, I think to start with, these guys saw me as a an unbeliever in the beginning– living like hell with them, going out drinking and partying. And then March 14, 2007, I get saved. The next day I go into the SEAL team and I’m telling them guys: ‘I became a Christian yesterday,’ and they’re like, ‘Ha ha, yeah right. We’ll see, Williams.’ As it stood the test of time, I think it kind of got to them a bit because they remembered how I was before and they want the old Chad back. That’s what they were saying: ‘We want the old Chad back.'”

“So imagine if someone was a Christian, and they go stepping into a situation as a Christian, people have that expectation, this person is a Christian– ‘I’m not expecting them to go drink and party with me’, but since they had that with me one time before, they wanted it back. They thought, “Here he is, young and impressionable, and we could change him.’ And a little bit of the hostility has to come from being light in a dark place, and this wouldn’t only happen on a SEAL team. This would happen in the workplace, or even in school. A lot of people are familiar with the scripture that says, ‘Let your light so shine before men, that they may see your good works, and glorify your Father who is in Heaven.’ That’s kind of the good side to being light, people see it–they’re melted, their hearts are melted by the things of God, and they want to glorify God because of that light. But there is something else light does that people forget sometimes, and that is this: Jesus also says that ‘The light has come into the world, that men love darkness rather than light because their deeds are evil for everyone practicing evil hates the light and doesn’t come into the light less their deeds be exposed.’ So that’s the flip side of being light: sometimes you’re light in a dark place and people hate it, and they don’t want to be near it because for them it brings up a feeling of conviction, and it exposes the dark lifestyle that they live.”

“There is a saying that goes like this: ‘The same sun that melts wax, hardens clay.’ It is the same light-giving source; sometimes it melts wax but for clay, it also hardens it. This is true for Christians. When you let your light so shine around men, some men will have hearts that are melted by the things of God, and they will want that relationship with God. There’s other men, who when you let that light shine before them, feel hatred towards it. They don’t want anything to do with it, and they lash out against it. So it’s a given, Jesus in fact says ‘In this world you will have tribulation, but be in good cheer because I will overcome the world’ John 16-33.”