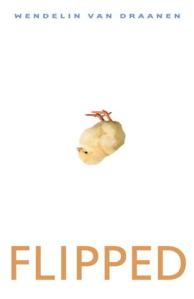 I have seen Flipped on many bookshelves and had never thought it would interest me. So when it was assigned as an 8th grade required reading book for English, I did not get too excited. However, after reading it, I regret having passed it by so many times. It was that good!

The novel begins when Bryce moves into the vacant house across the street from Julianna. That was when they were in second grade. From the time Julianna first saw Bryce, she knew they would be best friends. However, Bryce did not share her idea from the very beginning. He tries to avoid her as much as she tries to follow him.
Major events throughout the book test their soon-to-be friendship. At times, they wish the other were not in their lives at all. However, by the end of the book, the thoughts of both characters have ‘flipped.’ They have each learned about each other and realized what they had missed when they first met. This part shows the moral of the book about looking beneath the surface and not making snap decisions about a person before you get to know them.

My favorite part of the book was the ending, because it was very sweet and left me wondering what was going to happen next. I did not feel like there was too much of a cliffhanger, though the ending did leave some of my questions unanswered.

I could relate to this book when the characters were changing their minds about each other. I know that in real life, I change my mind on some things frequently. One minute I have made a decision, and the next moment, I have questioned myself and then completely change my mind. For example, this occurs on insignificant decisions like what to wear or more important decisions such as what elective to take in school.
I would rate this book a 9.5 out of 10 and would definitely recommend it to younger teens. You certainly do not want to pass it by at a bookstore or library like I did so many times. You will regret not reading it!