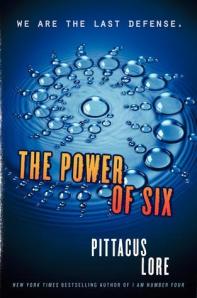 In The Power of Six, the sequel to the book I am Number Four by Pittacus Lore, aliens called Loriens move to Earth to escape the evil Mogadorians, who have already destroyed the planet Lorien and plan to take over the universe. The Loric are each named after a number and possess superhuman abilities called Legacies. Protected by a special charm, they can only be killed off in their numbered order. In I am Number Four, the Mogadorians have already terminated numbers one, two, and three out of the nine Loric. If all of the Loric are killed, there is no telling of what the future of Earth, let alone our universe, will be like.

After destroying a school and leaving Paradise, Ohio, Number Four and Six both go to Florida to flee the Mogadorians. On the other side of the world in Spain, however, Number Seven is trying to find her chest of Lorien because she knows that it is time to find the other Loric and face their enemies. But when the Mogadorians grow stronger and start to hunt down the only survivors of Lorien, there is nowhere else to hide from death and destruction.

Pittacus Lore is a pseudonym for the authors of the I am Number Four series. The authors are still in progress of finishing the series, which many young adults love. I would rate The Power of Six an eight out of ten because there wasn’t much action compared to I am Number Four. I would certainly recommend it to young adults and teenagers who love action and adventure, and can’t wait to finish reading the series!