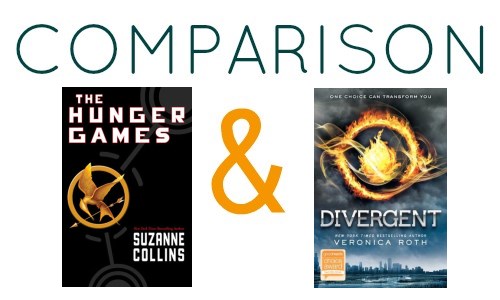 Most people have read either Divergent or The Hunger Games before, since both were a sensation because of the movies that came out based on them. However, that’s not the only thing that these two book series have in common. In fact, there are many different ideas that could be compared to.

Number of books: they are both a trilogy, no matter how many short side stories there are.

Genre: They both are set in a future America where there is slightly more advanced technology and something has gone wrong, so all the laws were changed.

Main hero: Both have a girl as their hero and main character. For The Hunger Games, it’s Katniss Everdeen. For Divergent, it’s Tris (Beatrice) Prior.

The government’s thoughts: The main ruling government would later be after the heroine (as in most books).

Inciting incident: These two heroines start the route of their story by doing something that the government doesn’t expect.

Of course, if we are comparing these two books, we should know their differences, too.

The heroine’s views of their society: Katniss doesn’t like the government and wishes that there were different rules, for she is of the poorest district, and has to feed herself, her four year younger sister, and her sort of there mom. Tris, on the other hand, while she does wish to be with a different caste, she is okay with her government’s rulings.

The love story: I felt that Katniss was forced to love the guy. Even though he loved her, it never seemed like she loved him in the same way. However, Tris and the guy she likes definitely loved each other. Whenever, one of them needed emotional help, the other was usually there to give it to them, and whenever they kissed, the detailed descriptions showed that they meant each and every kiss.

Hero’s development: Katniss doesn’t learn much; she keeps her traits throughout her story. Tris, however, does change her beliefs; by the end of book one, she has clearly not feel the same way as she had in the beginning of the book.

Endings: I want readers to firstly know that this is my opinion, and everyone is entitled to their personal opinions, whether or not they agree with me. I felt that while The Hunger Games trilogy had a somewhat short and boring ending, it resolved the plot in a good way. However, the Divergent trilogy ends in a long, detailed, but very disappointing and terrible resolution.

In the end, I can say that these two series are awesome, no matter what their pros and cons are. I’d advise you to try them both!
-Megan V., 8th grade

8 thoughts on “The Hunger Games vs. Divergent”