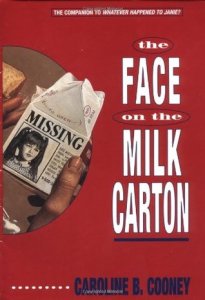 How would you react if you found out that you were kidnapped because there is a picture of you as a toddler on an ordinary, everyday milk carton? 15-year-old Janie Johnson recognizes her photograph on the “Missing Child” side of a milk carton in the young-adult novel, The Face on the Milk Carton by Caroline Cooney.

After identifying her picture on a milk carton at lunch, Janie is consumed by the notions of her kidnapping. As the story unravels, Janie discovers that “her parents” are actually her grandparents and her Mother was part of a cult when Janie was born. Temporarily relieved, Janie is still curious as to why her name on the milk carton said “Jennie Spring.”

Slowly unraveling the mystery of her past, Janie discovers that she was kidnapped by her “Mother” as a young girl and finds out that her real parents are in New Jersey. The end of the book leaves you with Janie talking to her real Mother. Does Janie leave her “adoptive” parents? Does she actually meet her biological parents? Does she ever find the women who abducted her? To find the answers to all these questions, one must read this book and the entire Janie Johnson series.

Reading this book for English, I was interested that it wasn’t mainstream like some other classical works. The storyline of the book is great, in my opinion. The execution could have been slightly improved. I liked how the first book ended in a cliffhanger and then you would have to read the next one and then the next one to find out what becomes of Janie. The last book did not have a very conclusive ending, but it was satisfactory enough. If you are interested in the mystery genre, then the Janie Johnson series is for you.