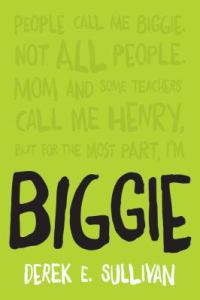 Every boy dreams of throwing a perfect game in baseball at least once. So does Henry ‘Biggie’ Abbott, but there is only one problem. Even though Biggie’s dad, Aaron Abbott (who left the family when Biggie was little), and stepdad, Jim ‘The Lazer’ Kaczor, were professional baseball players years back, Biggie is not built for the sport. He’s a high school junior and weighs over 300 pounds. Early in the book, Biggie despises athletics and having his dad’s last name, all he wants is to be left alone to maintain his straight As. But after pitching a no hitter in a high school P.E. wiffle ball game, Biggie discovers he has an “unhittable pitch,” and sets out with his younger stepbrother, Maddux, to be the first person in his town’s history to throw a no hitter.

Baseball isn’t Biggie’s only problem. There’s also a certain girl that he is in love with, but the same girl steals from the gas station where he works – right in front of him. And although it’s hard to believe, Biggie’s problems still are not over.

Although this novel sounds quite cliche, it is hard to put down. Biggie is quite a page turner, and the author, Derek Sullivan, manages to throw quite a few curve balls into the plot. Biggie is a novel not only for sports lovers, but for young teens everywhere. I would recommend this book for teens ages 13-16. As school comes to and end and summer is right around the corner, with baseball season in full swing, I believe that this novel will not be a strikeout.

Biggie is available for check out from the Mission Viejo Public Library.