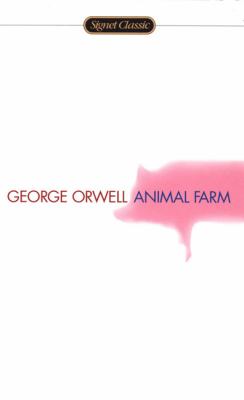 Animal Farm, a novella by George Orwell, is an allusion to the Russian Revolution and certain events in World War Two. The book begins with a boar named Old Major talking to the animals about his dream about revolution. All the animals on the farm want to overthrow their horrendous leader; Mr. Jones. As a result, when the idea of revolution is introduced, all the animals agree. A couple days later, Old Major died. However, the revolution continued. Two pigs took control when Mr. Jones left the farm: Snowball and Napoleon. Napoleon becomes power hungry and chases Snowball off of the farm. Over time, Napoleon becomes more and more corrupt and over the years he slowly changes the values of Animalism. At the end of the book, the animals can not tell the difference between the pigs and their so called better values and the humans that were ruling them before.

Having read this book as a homework assignment for school, I read it with a different approach and attitude. I put a lot of focus on what was happening and I analyzed the book much more than I would have if I was reading it leisurely. However, I believe this made the book more enjoyable due to the fact that I understood it better and I picked on interesting portions of the book that I wouldn’t have seen if I didn’t put so much thought into it. As a result, my recommendation for any interested readers is to read this book with care and thought because it makes the book much more enjoyable. All in all, I thought that this was a very well written book and I would recommend others to read it!

Animal Farm is available for check out from the Mission Viejo Public Library, Overdrive, and Axis360.