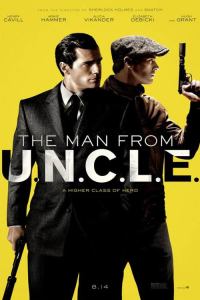 The Man from U.N.C.L.E is a modern take on a vintage spy show. The director, Guy Ritchie, tells the story of an American secret agent and a Russian secret agent teaming up to stop a third-party nuclear threat. The film takes place in the Cold War Era, when U.S.-Russia tensions are at an all-time high. The Berlin Wall still divides Germany. The American spy, Napoleon Solo, is both suave and daring. He carries out his missions with a casual confidence, in contrast to the Russian KGB agent Illya Kuryakin, who is serious and professional.

From the very beginning, the movie jumps right into action. Napoleon Solo travels to East Berlin to extract Gaby Teller from the country. Russia also wants her for information on Gaby’s father, a scientist who worked with the United States during World War II. After Solo and Kuryakin pit their skills against one another, Solo escapes across the wall. After the initial excitement, the movie slows down to reveal the exposition and driving force for the rest of the plot. Despite being locked in combat in the opening scene, circumstances eventually force the agents to work together to stop a terrorist organization from creating a nuclear warhead.

The 2015 film is based on a television show from the 1960s. As a result, everything seems old-fashioned, from the way people speak to the set design. The director creates the movie to be elegant and vintage, in sharp contrast to modern day blockbusters. Each scene is a work of art, using careful camera angles and interesting transitions. Even action scenes are well planned. Clear establishing shots ensure that viewers are never confused or overwhelmed.

The best aspect of this movie is the dynamics between characters. Solo and Kuryakin both have distinct personalities that often clash. Their friendly bickering is humorous and entertaining. As the movie progresses, they become unlikely friends, even adopting nicknames for each other. Although most of today’s audiences can’t really relate to the historical time period, it’s obvious that The Man from U.N.C.L.E. is vastly different from the typical action movie. If you’re interested in both action and elegance, this is the movie for you.