“One child, one teacher, one book, one pen can change the world” – Malala Yousafzai

Malala Yousafzai, an inspirational girl born in Pakistan in 1997, was a very well known speaker on the topic of equal rights. In 2012, she was shot in the head by a group of Taliban men who wanted to cease the movement she had begun. “They thought they could silence me.” Malala says in the documentary, He Named Me Malala.

The first half of her book, I Am Malala, explains her family’s background. Her father, troubled by his stuttering voice as a child, grew to be a powerful speaker who inspired Malala. Her mother, fortunate to have enough money to attend school, felt out of place and shamefully traded in her books for candies and sweets. (Her mother later regretted her actions and strove for a proper education). Young Malala witnessed these and other troubles in attaining an education which sparked something in her to speak out for what was right. These actions at such a young age reminded me of the song, “Unwritten” by Natasha Bedingfield. Malala knew exactly what she wanted to do with her life, and the lyrics of “Unwritten” display how you decide what you do. 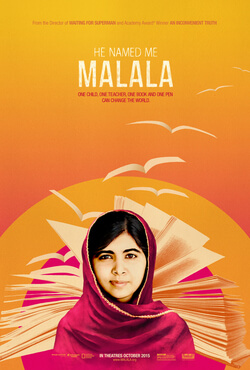 He Named Me Malala, the movie based on Malala’s life, shows the journey of her fight for education. The empowering documentary depicts her standpoint today, unlike her autobiography. She is not the “lucky 17-year-old” that some people say because all of the attention she receives. Malala struggles with schoolwork, stress, and fitting in, just like any other ordinary teenager. Another song that I think describes her life is “Stronger” by Kelly Clarkson. In truth, what didn’t kill her made her stronger.

Regardless of whether you get to know Malala better through print or film, I would definitely rate her story as an 11/10. Her words are indeed inspiring!