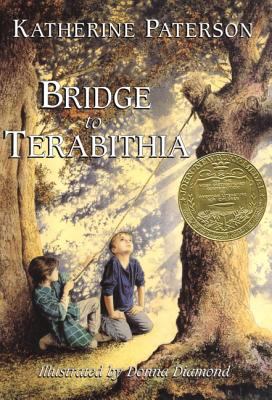 Jesse Aarons lives in a big family with four sisters and being the only boy pulls him down sometimes. But he never would have imagined that there would be a girl named Leslie Burke beating him in a foot race, becoming his class’ fastest runner. His confession of this fact led to the starting point of their relationships as chums.

As friends, Leslie and Jesse create an imaginary place to hide from the troubles of the world. There is a narrow rivulet in between the two worlds, sometimes when it’s raining the water roared and raved its intensity with the thunder and the rainwater never really got mollified. During sunny days, the singing water just lets it’s tender skirt trickle along the moist shore, showing happiness and relaxation with the caressing of the soothing sunlight. A decrepit rope connected the two of them as they created an imaginary bridge to the Kingdom Of Terabithia.

There were fewer things in the modern society compared to this magical kingdom. Ogres, fairies, and trees that can extend its flexible branches and help people are components that fall under this natural shield. The first thing after school isn’t homework anymore, but to implement their duty as queen and king to patrol in their own kingdom with the guard dog Prince, Jess and Leslie were inseparable.

It wasn’t until when Jess’s dream came true that he went to this art museum with his music teacher Ms. Edmunds, unaware that tragedy strikes while he is away. A miracle could happen, only so that Jess could be salvaged immediately from the interminable guilt.

The Bridge to Terebithia by Katherine Paterson is available for checkout from the Mission Viejo Library.