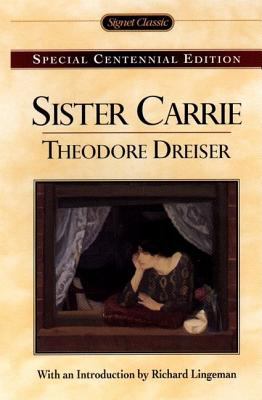 Carrie Meeber is from a small city who seeks to go to her sister in Chicago to have a better life. However, when she gets there she realizes the fact that her sister and her brother in law are in a very wretched condition together with their daughter. Unable to endure their apathy when she fails to secure herself a job, Carrie decided to leave. Before she even arrived in Chicago, she met Druet, a wealthy young man on the train who really likes her due to her beauty. So right after quitting her job at the factory, Carrie accidentally met Drouet around the street corners. He treats her a meal and often buys her beautiful clothing and jewelry which made her think in his favor. And thus, soon they were living together in a comfortable flat.

But it wasn’t soon when Drouet introduced Carrie to his manager friend Hurstwood. Lured by his gentleness and suave manner, Carrie fell in love with him and he with her. However, since Hurstwood was not in a relationship with his wife and his children, he lied to Carrie and said that he was unmarried. One day, Hurstwood under the influence of alcohol accidentally took ten thousand dollars from the cashier’s unlocked box and decided to flee to New York. He wheedled Carrie into escaping with him as well and so the two left for New York. However, life was not as easy there because everything was more expensive. After several unsuccessful attempts at finding a satisfactory job, Hurstwood depended on Carrie to earn and they again fell into the state of poverty.

Just then, due to her looks, passion, and aptitude for singing and acting, Carrie made a career in the theatre. She was well-liked by a lot of rich people and thus deserted Hurstwood. Although she regularly supported him somewhat, she severed the relationship at last when Hurstwood, due to his pride, stopped asking money from Carrie and suicided at last.

Sister Carrie by Theodore Dreiser is available for checkout from the Mission Viejo Library.