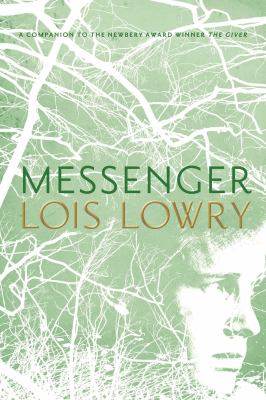 By this point in The Giver series, people have given up reading for a host of reasons. First, they never even made it to Gathering Blue. Third, they read Gathering Blue and did not see the connection to The Giver so didn’t see a point in continuing. They have something against their amazing book.

First of all, it’s a series so, like, get with the program. Plus they are great reads anyway so you won’t be wasting your time. Basically, there is this world (presumably ours but in the future) where there are scattered communities that are pretty much all messed up. One is a utopia, where a boy named Jonas is selected for a special job that will lead him to see beyond the norm. Another is just really wonky and the government (which btw is all guys) pretty much enslaves children with talent. Here, Kira is commissioned as a slave for her skill in weaving.

The Giver is dedicated to Janas and his story while Gathering Blue tells of Kira and her triumphs. A lot of the time people read The Giver and are like “Wow, that was great! (The book, not the society people, don’t go thinking that) What rose can I read by my new queen, Lois Lowry?”. Then they are like, “Oh, Gathering Blue, this looks cool.”. And they go through and read it but don’t actually pay attention to it because they spend the whole time trying to figure out how it is related to The Giver (myself included). Friend, don’t make that mistake. Not if but when you read Gathering Blue, appreciate it for what it is. Don’t meet Micheal Jackson and then Janet and spend your whole conversation trying to look for things that make them look related! You’ll miss out on everything that she has to say.

The point is, before you do anything else with your life, read The Giver. Then, before you even blink start reading Gathering Blue and get your life back on track. If it is not apparent, these books are, like, sacrilegious to me. Messenger does not really connect The Giver and Gathering Blue. Now you are probably thinking, “What, I just went through all of your lamenting for that”. Hold your horses. Messenger lays the groundwork for Son, the last and longest book in the series. Messenger and Son are as related as The Giver and Gathering Blue are unrelated if you catch my drift. In Messenger, you see more of two background characters from Gathering Blue. If you would like the general summary, continue further.

WARNING: THERE WILL BE SPOILERS FOR EVERYONE WHO IS NOT TAKING THE TITLE OF THIS PARAGRAPH SERIOUSLY.

You have been warned. If you thought that I was ranting up top, you have not seen the beginning. Deep breath and…once upon a time in Gathering Blue when Kira meets her father, Seer, he says that he lives in a community that is like literally the only nice place in the world to raise your kids. They accept refugees from all of the other wackadoo cities, in fact, it was founded by them too. Kira’s friend Matty goes to life with Seer. The story takes place while Matty is coming of age (surprise surprise, Lois Lowry is a partial time that age) and is looking for a job/purpose in the world. He really likes to deliver letters and parcels for the villagers (because there aren’t and forms of digital messaging here). He is like the Hermes, going back and forth. He aspires to be the town’s mailman. In this city, it is sort of like in colonial times. Everyone is an expert at something. For example, there is one baker, one teacher, one candlestick maker. You name it, there is only one. Matty wants to be an expert delivery man. Anywhoo, he is coming of age and learning about himself when low and behold, a conflict arises! This town is basically full of first-generation refugees. These people understand the serious oppression in their world. They get that it is no bed of roses.

Not only that, these people were brave enough to escape and start new lives for themselves. They are the spinning images of chivalrous; morally strong and outwardly brave and kind. However, this super sketchy dude comes along and (almost) ruined it. In case you have not picked up on it by now, everyone’s superpowers are kind of magical. Jonas and his “seeing beyond”. Kira’s impeccable weaving. Matty’s, uh, speedy deliveries. Well, this sketchy guy, Trademaster, he’s magical too, but he has dark magic. He operates this event where he comes into the good little town and tempts people with things that they desire in refers to part of their soul. Mahhhh! I know, it’s super trippy. So, say you want the winning lottery ticket. Snap! He makes it happen. Awesome, right? No friend, most defiantly not awesome. In return for that lottery ticket you are going to have to part with part of yourself. “Great!” you think yo yourself, “I get this lottery ticket and I get to get rid of my bad temper, cool!”. FRIEND, sit down, sit down right now.

Trademaster would not want your bad temper, no one does. He collects juicy things like “kindness”, “morality”, “intelligence”, “bravery”, things to put on your resume. So you get the lottery ticket and you win and you are loaded but your partner breaks up with you and you and says your breath stinks and you are losing hair and getting fat and wrinkly and old. Then you are sitting all alone one-night scooping ice cream out of a carton watching soap operas and wondering what happened to your life. Your rich, but lonely. Snap! Trademaster took your “romanticness”. Not worth it, huh. But now it’s too late. You are stuck being lonely and single forever. So basically, Trademaster rolls into town and everyone is like Oh, ah! Matty quickly learns from the wisdom of Seer that Trademaster is sketchy and tries to convince everyone else of this. Meanwhile, Trademaster is corrupting the town. This empire of refugees is building a wall to block out people seeking freedom and a new life. Also, if the wall is closed up Seer will never see Kira again! Matty has to go on the most important delivery mission of his career, to bring Kira to see her father. I am going to leave you on a cliff hanger. But hopefully, my summary has intrigued you enough to keep reading the series.

Once upon a time there was a rural, simple little town built of refugees from maniacal communities. There is a boy who is coming of age and wants to discover his calling and has a passion for mail delivery. He and his adopted father are the only ones who see through Trademaster an evil magician who’s ambition is to turn all of the noble-minded people against one another and all other refugees. I can never give it the justice that it deserves.

This book is not as exciting as the other three, that’s true. However, it connects Gathering Blue to the last book and lays the foundation for Son which is really, really phenomenal. Thank you for listening to my ranting, hopefully, it has done you some good and Good Night!

Messenger by Lois Lowry is available for checkout from the Mission Viejo Library.

3 thoughts on “Messenger by Lois Lowry”