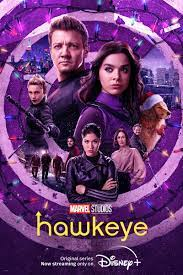 I always felt like Hawkeye was one of the more overlooked characters in the MCU. However, this series reveals a lot more about how the events of Avengers: Endgame affected Hawkeye. I enjoyed watching this series because it had a lot of action and was generally really intriguing. I wasn’t expecting a lot of the events which took place in the series.

It starts with Kate Bishop secretly following her mother’s fiance, Jack Duquesne (her father died in the 2012 New York attack led by Loki) to a black-market auction. The auction includes items from Hawkeye’s former identity as the Ronin. As the event is soon attacked, Jack takes Ronin’s sword and Kate grabs the Ronin suit. She claims to the attackers that she is the real Ronin. After seeing the headlines concerning the Ronin, Hawkeye finds Kate and they eventually end up trying to clear the name of the Ronin.

However, during his time as Ronin, Clint Barton (Hawkeye) made a lot of enemies. One of those enemies, the daughter of a man he killed, is looking for revenge, and she won’t stop until she gets it. Additionally, Yelena is also on a mission to get revenge on Clint for “killing” her sister Natasha (Black Widow). Like the majority of people, she doesn’t know what actually happened on Vormir. Suddenly, for Hawkeye, a simple holiday vacation with his family turns into a dangerous mission.

This series was really enjoyable, and I am looking forward to the next installment of the MCU. If you are a Marvel fan or someone who likes action movies or series, you will not want to miss this series.