1. Hogwarts School of Witchcraft and Wizardry from the Harry Potter Series by J. K. Rowling
After living in the wizarding world for the duration of the saga, who didn’t deny their muggle roots, and delude themselves into believing they possessed the ability to spell-cast? What if you could live in Harry’s world, where you would receive your attendance letter when you turn eleven and get shipped off on the Hogwarts Express for your first year (unless you’re a Squib, of course ) in September? My friends and I still reassure ourselves that our letters obviously got lost via owl post, and Dumbledore will make an exception when he discovers his tragic mistake… and we’re going on fourteen.
See also: Beauxbatons Academy of Magic or Dumstrang Institute of Sorcery

2. Camp Half-Blood from the Percy Jackson and the Olympians Series by Rick Riordan
Don’t want to be a wizard? How about the child of a Greek god? Your friends would be your family (literally, for all the gods have some relation to one another; therefore, their children do as well). You’d have the opportunity to venture into the mortal world and perform dangerous tasks for the gods (which you would hopefully succeed). Plus, who wouldn’t want to be a demigod? I definitely would.
See also: Camp Jupiter from the Heroes of Olympus series (for those with Roman deity heritage) 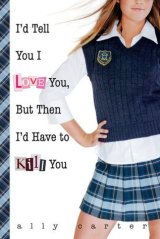 3. The Gallagher Academy for Exceptional Young Women from the Gallagher Girls series by Ally Carter
The girls who attend this school have reputations of rich, genius heiresses, but they’re really clandestine agents-in-training for the CIA, under cover. I would absolutely love to be trained in the art of espionage, and going to a school that specializes in just that? Now that would be awesome.
See also: Blackthorne Institute for Troubled Young Men (I thought it was even cooler than the girls’ spy school! For those of you who have read the books, you know who the boys really are. Those of you who haven’t– read the books; you’ll find out.)

4. The Princess Academy from Princess Academy by Shannon Hale
Every girl (okay, most girls…) wanted to be a princess at one point in time, whether you idolized Snow White, or someone a bit more like Mulan. At the Princess Academy, competition and challenges prevail in order to discover the best fit for the throne; whether its testing your poise and composure in times of danger or your tolerance when it comes to the immature practical jokes of your classmates, the Princess Academy separates the arrogant from the strong, and the smart from the intelligent.

5. The Alpha Academy from the Alphas series by Lisi Harrison
The Alpha Academy is a school for the next generation of powerful, influential woman (sorry, boys!), “without any distractions from the mediocre world.” The girls are forced to compete — after all, there can only be one Alpha — for worldwide fame, fortune, and guaranteed success in life. The series was… okay… (not exactly my cup of tea) but being the fairly competitive person I am, I absolutely fell in love with the idea of a school where it is a part of your everyday life; a place where females are dominant, manipulation of your peers is seen as resourceful on your fight to the top, and smarts are valued, and never overlooked.

What Hogwarts house would you be in: Hufflepuff, Ravenclaw, Gryffindor, or Slytherin???

Who would be your godly parent??