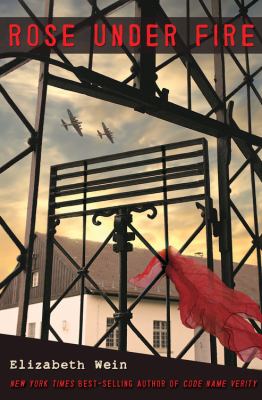 “Hope is the most treacherous thing the world. It lifts you and lets you plummet. But as long as you’re being lifted, don’t worry about plummeting”  -Elizabeth Wein, Rose Under Fire

Rose Under Fire, written by Elizabeth Wein, is a historical fiction novel about Rose Justice, an Air Transport Auxiliary pilot for the Royal Air Force. She along with other pilots, Maddie, and Felicyta, carry out their duties of delivering airplanes for the RAF.

However, one day, while delivering a Spitfire from Camp Los Angeles in France, to England, Rose encounters a V1-flying bomb, a pilotless plane carrying a bomb, heading towards Paris. She prevents the attack, but it takes her off course over Germany.

After flying over German territory aimlessly for a while, two Luftwaffe pilots spot Rose’s Spitfire and cornered her to follow them inside Germany. Rose is taken in as a political prisoner and sent to Ravensbrück Concentration camp, a place where she would learn to survive the horrors of the concentration camps in Nazi Germany.

The book is divided into three parts and it is written from Rose’s point-of-view. It is a companion to Code name Verity, but it can be read as a standalone book. I loved the writing style of the author and the characters in this book. Wein did a wonderful job in details and in staying true to most of the historical facts.

Since most of the story is set in where Rose is a prisoner in Ravensbück, there are some parts where it is graphic such as describing the experiments the Rabbits went through in Block 32. There are curse words in this book (more f-words than a PG-13 movie, but less than an R-rated movie), but it’s expected since it’s set during World War II.

If you’re tired reading YA books with romance or you’re not interested in romance, this book might be great for you. There is a little romance, only a tiny bit when Rose was dating Nick before she got arrested and brief instances where Rose would write poems about Nick, but that’s it. I loved that the author focused on the strong friendships Rose made at Ravensbrück instead of her relationship with Nick.

I don’t read historical fiction often, but after doing a quick Google search on ‘YA books without romance’, I discovered this book. It took me a while to read since I recently started reading novels again, but overall a great read that might make you a bit teary-eyed.

Rose Under Fire by Elizabeth Wein is available for checkout from the Mission Viejo Library.

The first time I heard about this book was a recommendation from my English teacher. I haven’t been reading in while and I asked my teacher for some book recommendations in YA fiction. It took me almost a year until I finally picked up and I’m glad I read it.

The story sets in time around the 1950’s about a 14-year-old boy named Ponyboy Curtis and his life as a Greaser in East side. Ponyboy is part of a gang called the Greasers, the poor working class that causes trouble with the law. They are strong enemies against the Socs (Socials), who are the West side rich kids that cause trouble with the law, and they bully and fight the Greasers for fun.

Ponyboy’s gang includes his two older brothers, Darry and Sodapop, Dallas Winston, Johnny Cade, Two-Bit “Keith” Matthews, and Steve Randle. Even though do drugs, curse, commit crimes, the gang is loyal to each other and treat each other like family.

At the beginning of the book, Ponyboy admits that he doesn’t get along with his older brother Darry or Darrel. When Ponyboy comes home later than usual, Darry, his guardian since when, becomes furious with him and leads to drastic consequences to Ponyboy’s “normal” life.

Although there is violence, illegal activities, and mature themes, I loved seeing the characters develop and grow. The friendships and close bonds in this story were fantastic to read.

Overall, I found this book an enjoyable read and I recommend it for teens and up. So far my favorite book I read in 2017.

The Outsiders by S. E. Hinton is available for checkout from the Mission Viejo Library.

In Challenger Deep, written by Neal Shusterman, Caden Bosch is a teenager who struggles with mental illness. This story is told from two perspectives where it switches from his point-of-view of his life and his fantasy world. In his fantasy world, he has become a part of a voyage with a man who calls himself the Captain and his parrot to explore the Marianas Trench, Challenger Deep, to find the bottom of it.

In Caden’s daily life, he begins to show signs of his mental illness. His friends, family, and teachers begin to notice his anxiety, his random thoughts, and his new hobby of pacing and walking. At first, they shrug it off thinking it’s only a phase, but everyday Caden falls deeper in his mental illness.

Caden’s story is an emotional one about a boy going through his first mental breakdown. There were some funny moments, but it’s a sad story of a teen going through a mental illness.

Although it took me some time to read this book, I highly recommend reading it. This book gave me some new insight about how people with mental illnesses feel. The author did a fantastic job in capturing Caden’s emotions and of his family and friends emotions.

There are some curse words ( no F-bombs though) and no sexual content (Yay for those who don’t want to read smut!). This book has little to no romance since it mainly focuses more on the friendships of Caden and his recovery from his mental breakdown.

This is a good book for older teens, I don’t recommend kids ages 13 and younger reading this because of the mature themes. Also, it can be a bit confusing because it’s from Caden’s perspective, but it’s entertaining.

*Spoiler alert* In one scene, some of the patients talk about what happened to them before they were hospitalized. The author doesn’t go into detail, but it’s a little disturbing.

Challenger Deep by Neal Shusterman is available for checkout from the Mission Viejo Library.