David Bowman could be characterized as emotionless because in order for him to open the emergency latch door to get himself to safety, he lets go of the body of his fellow scientist, Frank Poole, who he recently just picked up. He does this to ensure that he could live because Hal, the “sixth member” and computer on board, malfunctions and doesn’t let David Bowman in with the body of Frank Poole. The body of Frank Poole was held onto by the claws of the pod that David Bowman was in. Since Hal didn’t let David to enter, he had to enter through the emergency landing pod, which had to be opened by the claws of the pod he was in, so without thinking twice, David Bowman let goes of Frank Poole’s body, into space. This shows how David Bowman is completely emotionless and that relates him to Odysseus because when Odysseus returns to find that his maids have betrayed him, he makes them clean up the blood, and then he decides to kill all of them, which I think is completely unfair because he never took a second thought to consider the circumstances that the maids were in. The maids didn’t really have any choice but to betray him. So, this is a reason why David Bowman and Odysseus relate.

Another reason why David Bowman is like Odysseus is because David is intelligent. Throughout the movie, David Bowman shows his smartness in many ways. First, when Hal restricts David from entering, he thinks of another way, and succeeds. David entered through the emergency landing pod. Since he didn’t have a helmet, he had to improvise. He brilliantly lined the door to the opening of the emergency pod landing, then he jumped out grabbing the latch handle to close it. That plan that he made, in a matter of barely any time, saved his life. This is why I would describe David Bowman as intelligent and smart, which would relate to Odysseus too because in order for Odysseus to defeat the cyclops, he used his skilled mind to blind the cyclops and save his crew, quite simply from dying. Another time in The Odyssey when Odysseus shows how he is smart is when he heeds to Circe’s advice to not eat the cattle on the island of Helios. 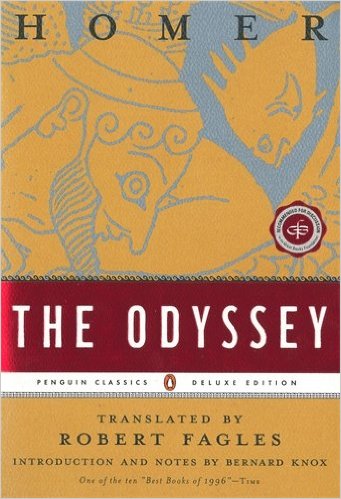 Lastly, I would relate David Bowman and Odysseus with the trait of strong-willed. David Bowman, shows how he is strong-minded when he continues to Jupiter even though he lost all of his fellow scientists and cutting out Hal.This, to me, shows that he is persistent and will do anything to succeed in the mission. Whether that’s always good, or not, that’s arguable on the situation at hand, and in the circumstances, I would say that it is a good thing that David Bowman in strong-minded and strong-willed to continue to Jupiter. This attribute relates to Odysseus in many ways. Throughout, The Odyssey there were many times where Odysseus showed his courage and his strong mind. For example, when they passed by the Sirens, he sacrificed himself for the crew, he stayed tied to the mast ended up being the first man to survive the Sirens’ song. Also, he shows he is strong-minded when he is forced to stay for seven years at Kalypso’s island. He does end up staying all seven years and then is set free, so his time in the island, shows the readers how strong-willed and strong-minded he can be.

Throughout 2001: A Space Odyssey, David Bowman shows how he relates to his Greek equivalent, Odysseus. First, how emotionless he is when he lets go of Frank Poole’s body into space and how Odysseus slaughters all of his maids. Second, when David Bowman shows his intelligence, quite like Odysseus blinding the cyclops, when he finds another way to enter through the emergency landing hatch. Lastly, David Bowman’s strong mind related to Odysseus when he continues to go to Jupiter, and when Odysseus stays captive for seven years, but “toughs it out.” Overall, out of all the characters in 2001: A Space Odyssey, I would say David Bowman relates to Odysseus the most.

2001: A Space Odyssey is available for check out from the Mission Viejo Library.