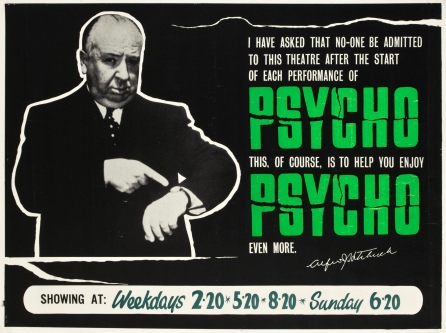 Psycho is an amazing piece of both horror and suspense. One day when my mom and my little brother where at Sea World, I took advantage of the time to watch some good, old classic horror movies with my dad. At first we watched Apocalypse Now, a movie about a soldier in the Vietnam War. Then we stumbled upon Alfred Hitchcock’s Psycho, a movie about Norman Bates and his crazy relationship with his mother.

At first the movie was kind of slow and didn’t reach the suspense fast enough to call it the first slasher film in film history. Then as the movie kept on going and going it got to the part that made it so famous. The stunning thing about it was that you never would have seen any of these parts in the movie happen.

If I went to see Frankenstein or Dracula I wouldn’t see anything I saw in Psycho. For this review I really had to put myself in someone else shoes. It made me think how this film would make me feel if I was alive in the 1960s. This film would shock me because there was so much suspense in the film. For example, the music–an excellent job by Bernard Herrmann–had me at the edge of my seat because it was so suspenseful.

In general, the entire movie was outstanding a real master piece of both suspense and horror. This film earned this title “the first slasher movie ever”. In my mind this film put Alfred Hitchcock on the map in my opinion. This film not only was remarkably successful but, this film inspired a lot of films like it. This movie has a perfect score in my mind.

Alfred Hitchcock’s Psycho is available for checkout from the Mission Viejo Library.