“Mr. Sammler’s Planet” is the work of American writer Saul Bellow. The novel describes in great detail a three days trip to New York of a Polish Jew who survived the second World War. He attended lectures, was threatened by black pickpockets, his daughter took manuscripts, and his nephew died. The story is interspersed with untold personal and painful memories of the concentration camp’s dark days—the experience of being buried alive, his wife dying, and him trembling in the tomb. The story has a strong sense of painting the protagonist’s real life in front of the reader. “Mr. Sammler’s Planet” is filled with Mr. Sammler’s musings on such weighty questions as humanity, history, religion, the past and future of mankind.

Mr Sammler’s eyes give the reader a unique perspective on the world. Mr. Sammler had only one eye, and he could see the outside world from only one angle. The beginning of the novel presupposes Sammler’s specific ethical standpoint. Mr. Sammler was blind in one eye, but that did not prevent his interest in the outside world. He still had a special interest in books and papers, implying that he was a man of learning. The author apparently reminds the reader again of Mr Sammler’s patient status. In addition, in this description, the author adds some new information, suggesting that Mr. Sammler is a man of insight, and that his observations of the outside world are worthy of the reader’s expectation which prepares the author to express his views later through what he sees and feels. The description of Mr. Sammler as a patient creates a good foundation for plot development in the novel.

The book Night by Elie Wiesel is an inside look at the holocaust through the eyes of a young Jewish boy. It is the real story of the author, which is why it is so astounding. I believe that his purpose for writing it was to shed light on how devastating the holocaust was, the concentration camps, and what it means to be broken as an individual. It is filled with so much pain and suffering, and yet that was what made it undeniably real. His life during this period of time was so horrible that he longed for death as opposed to the darkness of the world around him.

Without the basic human needs for food, water, shelter, and warmth, the spirit begins to weaken. This caused him to be angry at God and his initial strong beliefs to falter, which was heartbreaking, as now, without his family or religion, he was utterly and completely alone.

Though the book could be dark and upsetting due to its raw storyline, it was also very eye-opening for me, as I learned many new things about the holocaust and also perceived it through the eyes of a young boy. Although he endured the worst struggle of his life during that time and lost the ones he loved most, him telling his story can be an inspiration for people to never give up.

Night by Elie Wiesel is available for checkout from the Mission Viejo Library. 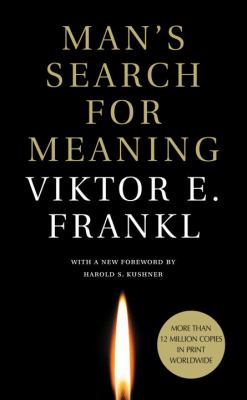 We’ve all heard various accounts of how life was like in the Nazi concentration camps; how millions perished in the gas chambers and how fear pulsed through all of the prisoners’ veins day and night. However, rarely do we hear about how everyday life was like for a prisoner in a concentration camp. Sometimes, it’s the smaller things, the things that seem to be less significant, that are really the most horrible. I’m not at all implying that the gas chambers weren’t horrible, they were unequivocally inhumane, but some of the things that Viktor Frankl describes in this book seem just as bad, and, in some cases, even worse.

Viktor Frankl, a Viennese man, was taken captive initially to a concentration camp in Auschwitz. As a liberated victim, and through his knowledge and understanding of human psychiatry, he has been able to give a very accurate and detailed account of his time and experiences as a prisoner.

He describes three stages of a prisoners’ mental state: shock, apathy, and coping with depersonalization after liberation (if they were lucky). As he explains each stage in detail, he gives anecdotes, which really helped me to gain a clear understanding of the psychiatry behind it all.

What really struck me by surprise as I was reading this book was how utterly unjust it was for those who were held captive in the concentration camps. Of course, I knew prior to reading this that the prisoners were treated unfairly, but I suppose I never fully comprehended the extent to which it went.

At the beginning of the book, Frankl recounts the first time he’d entered the camp. He recalls an SS guard standing by the gate who examined each prisoner carefully, deciding whether they’d be capable of the strenuous labor they’d be subject to if they were admitted to the camp. Anyone who appeared weak in any way was immediately sent to the gas chambers. This need to be “fit” plagued the prisoners throughout their time at camp as, at any time, if someone were to sustain an injury or grow ill, they’d be deemed “incapable” and were promptly sent to the chambers. This was but the first of many horrors that Frankl would encounter at the camp.

Additionally, Frankl discusses logatherapy, a form of psychiatry, which can loosely be defined as “finding a will to meaning”. He describes it in the context of a concentration camp: along with a lot of luck, the one thing that kept Frankl alive at Auschwitz was his life’s work pertaining to psychiatry.

I thought that this book was a very fascinating read. I definitely learned a lot more about how life was like in concentration camps, and the section on logatherapy also intrigued me–some of the concepts he discussed really made me think hard. This is a very powerful and inspiring book–Viktor Frankl is an extremely strong and willful individual.

Man’s Search For Meaning by Viktor Frankl is available for checkout from the Mission Viejo Library.