Born into a Hungarian Jewish immigrant family, Von Humboldt Fleischer had the romantic temperament of a poet. Many things were sacred in his eyes, and he dreamed of transforming the world with art. But his success did not last long, and he was vilified by some unscrupulous writers. By the end of the 1940s his romanticism was out of date and the era of fanaticism and poetry was over. Art could not transform society, so he tried to get involved in politics, but his bad luck was so bad that he was sent to an insane asylum. Although he was released from the hospital, he soon died in a New York tavern and was buried in a funeral mound. Charles Citrine was the son of Russian Jewish immigrants. After his rise to fame, he went to New York to follow the great poet where Humboldt helped him to become a university lecturer and to write a historical play based on him.

While Humboldt was very poor, Citrine’s play was a hit on Broadway. Fame was followed by money and beauty and he lived a life of luxury. The temptation of material broke his worship of the authority of art and his pursuit of serious thoughts, which made him lose his creative inspiration. At the same time, he could not get rid of the intellectual disposition. His life is full of material and spiritual contradictions, both want to enrich the human soul, but also want fame and wealth. His soul was lost in uncertainty and anguish. After years of spendthrift, divorceable wives, dissolute mistresses, lawyers, and social gangsters trying to cash in on him, he went broke and ended up in a cheap boarding house in Spain. Just when he was at his wit’s end, he was presented with Humboldt’s bequest — two script outlines, one of which has been made into a movie and has become a worldwide sensation. Humboldt’s gift not only saved his life and future, but also gave him a deeper understanding of Humboldt’s pain and madness along with the fate of intellectuals.

“Humboldt’s Gift” is a genre painting of contemporary American society. No street, no building, no car, no dress, and no hairdo is imaginary. Even fictional characters are based on real people living in the real world. “Humboldt’s Gift” is a panorama of American society on a grand scale. From hooligans to senators, from the White House to chicken joints, from mystics to mafia-controlled booty shops, poets, scholars, cultural crooks, big money gamblers, judges, lawyers, psychiatrists, and moneymakers, the list goes on and on. 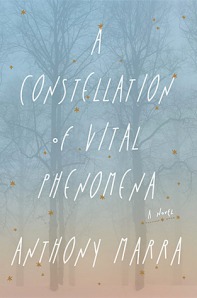 The prior question was once pondered solely by humanity’s greatest minds, but now, to the chagrin of some, has become somewhat cliched ponderation of the masses. Yet this propagation of the question what is life? is neither deplorable nor unexpected, for, in all verity, it is a fundamental consideration in the collective human consciousness, a driving factor that motivates us to make sense of this experience we all share.

In an attempt to address this question, or at least provide a platform by which it can be effectively considered, writer Anthony Marra reduces this ubiquitous thing we call life to the following: a constellation of vital phenomena-organization, irritability, movement, growth, reproduction, adaption, a definition whose first three words title his debut novel. By Marra’s own admission, he extrapolated the aforementioned definition of life from a medical textbook, an object which, as his novel even seems to suggest, is a prodigious, lifeless, static pool of knowledge surveyed and marked by wise men of ages past. Despite the seemingly esoteric and perhaps at first bland nature of this definition, through the course of A Constellation of Vital Phenomena, it becomes a stunningly beautiful mechanism by which the whole of human life can be understood.

While a new novel, published in 2013, Marra’s work can easily be counted among the highest ranks of literature from all ages. The writer’s prose drips with mastery, perhaps best evident in his provision of detail, which, although occasionally rambling, is rich and luscious. Indeed, these subtleties, albeit meritorious for their exquisite verbiage in themselves, perhaps more importantly contribute to the storytelling for which Marra is even more laudable as they color events in the lives of the novel’s characters.

Indeed, A Constellation of Vital Phenomena to a substantial degree ignores the traditional and popular sense of plot, with its linear and structured qualities, adopting a more free-flowing composition in which various moments of the lives of a slew of characters who live in a war-torn Chechnya are criss-crossed. In actuality, the novel spans the five days after the capture of Dakka, father of Havaa and friend of Akhbar, the latter of whom takes the former to a hospital in the Chechen capital city, Grozny, which lies 12 kilometers from their village of Eldár, in the hopes that the renowned surgeon, Sonja, who runs the nearly defunct medical facility, will allow the young girl to reside there.

One of the most rewarding facets of the novel is the full development of all the story’s major characters, a feat achieved through that very detailed presentation of different moments in each of their lives. Similarly wonderful is the fact that Marra ties the characters together in the most seemingly trivial, yet achingly touching and poignant ways. The author creates with his web of characters and events a mirror to the definition of life from which he draws his inspiration. Truly, the novel becomes its own organism, a cornucopia of characters who tell a hauntingly beautiful tale of a lost girl and allude to the complexities of life in general. A Constellation of Vital Phenomena calls the reader into deep reflection, in particular to view his or her own life as just that, a series of inseparable and interrelated moments and people and things, making all of life’s constituent parts ever more lovely and significant.