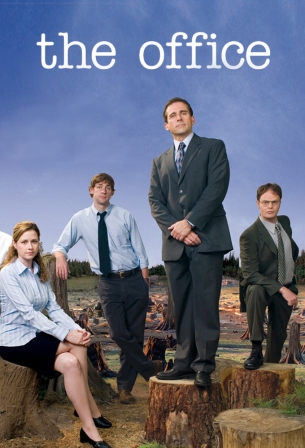 The Office is unlike any show I’ve seen before (granted I really haven’t seen an extensive variety of shows). What I noticed first is that there is no music (aside from the intro theme music). In this show, the characters know that there is a camera there, recording everything that they say and/or do. Most of the time, the camera just follows the characters around the office, but there are times where the camera will sit with each character individually and interview them about what is happening.

All of the characters are funny and quirky in their own unique ways, which I really like. Michael Scott (Steve Carell) is the regional manager of the Scranton branch of Dunder Mifflin, a paper company. He’s most likely the most flamboyant and eccentric boss you’ll ever see. His philosophy is: friend first, boss second. He’s constantly trying to fit in with all of his employees, while struggling with intermittent relationship problems. Yet, through all of this, he remains bubbly and confident in himself. Although he often says rude and unprecedented things, his true intentions are honorable (most of the time).

Throughout the show, Dunder Mifflin undergoes many changes — people come and go, there are changes in leadership, people are transferred. The camera follows and records everyone’s reactions through all the mayhem and chaos.

The other characters include the sales staff: Jim, Stanley, Dwight (Michael’s loyal Assistant to the Regional Manager), Phyllis, and Andy. In accounting: Angela, Oscar, and Kevin. Meredith, Kelly, Creed, and Ryan are each their own department. Pam, the receptionist, Toby, the HR rep (whom Michael has an unexplainable hate towards), and the warehouse workers led by Darryl. I love how well each of the characters are developed, despite the fact that there are so many of them.

If you enjoy comedy movies or shows, I’d definitely recommend this. If I’m being perfectly honest, I wouldn’t really consider myself a huge comedy fan, but I ended up really enjoying this show. So, even if you’re not sure that you’ll like it, at least give it a try — it might turn out to be your favourite show yet.