Coco was a wonderful film for everyone. It was about a young boy named Miguel who decided he wants to be a musician. The only problem was his family is against music.

I liked the movie really much. I thought it was visually stunning and told a very great story. It had basically any Pixar movie standard that you would see in other Pixar movies.

The movie was very enjoyable. I thought it was both visually stunning and had a good story. The moral of the story was that in order to be a family you have to support one another and you shouldn’t force a life on your son or daughter that they don’t want.This movie reminded me a lot about The Book of Life. Which was another movie set in Mexico about the Day of the Dead. I liked The Book of Life which helped me like this movie.

There was one scene in the movie that needed so much detail to make it the scene it was. If I know one thing it is that Pixar tends to overdo a lot of their scenes which is always a good thing. There was also very bright colors that made the visuals even more better than they already where.

I really enjoyed Coco and would recommend seeing it. 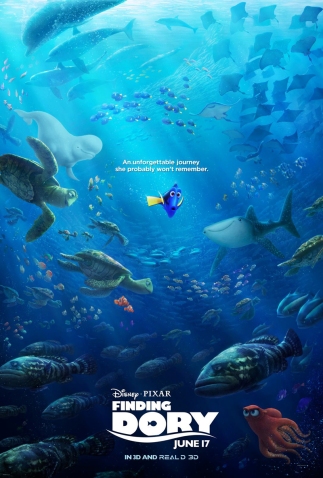 Over the last 20 years, Pixar Studios has cemented itself as one of, if not the best animation studios in the business. This is due to their consistency and devotion to their franchises. One of the most successful of these franchises was Finding Nemo, which was a critical and commercial success for Pixar. After 13 years, the sequel Finding Dory has finally been released.

Set after the events of the first movie, it is now Dory’s turn to go looking for someone, with Nemo and Marlin to help. What I really liked about the film was that the characters still have the same voices after nearly a decade. Especially Ellen DeGeneres who reprises her role as Dory. She had a fantastic performance, making you truly care about Dory and her struggles. Marlin is as uptight as ever, and provides a great contrast to Dory’s recklessness. The new characters in the film are all well done also.

I found the film to be paced very well also, with fantastic writing and humor to wrap it all up nicely. There are some genuinely hilarious moments in this movie, more than I was expecting. At the same time, there are very heartfelt and emotional moments that stick with you.

However, one thing I didn’t like about the film was the lack of innovation from the first. It explored similar themes of family, forgiveness, and hope, and while different events take place, they weren’t as unique as I would’ve liked. After Zootopia, I would’ve preferred a less clichéd story along with some social commentary. But these are just small nitpicks for an overall excellent experience.

Finding Dory is one of the best animated films in years, bringing back everything we loved from the original and reminding us how great Pixar can be. Anyone who enjoys animated movies, is a fan of Finding Nemo, or wants to have a fun time should go see this movie. In fact, the last word of the entire film describes this sequel perfectly: unforgettable.