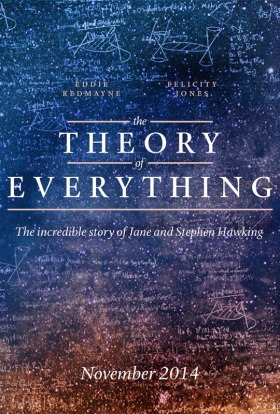 The Theory of Everything is an inspiring and emotional movie based off of the true story of Stephen Hawking, the well-known physicist. Stephen, played by Eddie Redmayne, is a very bright young man who is working towards a doctorate in physics at Cambridge, the most prestigious school in England. He meets Jane Wylde, a beautiful and kind arts major, and though they may have seemed like an unlikely couple, they grow to be very close.

However, not long after he meets Jane, he learns that he has motor neuron disease, a debilitating disorder affecting the use of his muscles. He is told that he has but two years to live. Being an ambitious man, Stephen continues his work toward a PhD, and though he wasn’t previously able to decide upon a major, he finally settles on time.

Initially, Stephen pushes Jane away, not wanting to hurt her, but she persists, wanting to spend as much time with him as she can. The two get married and start a family, and though it is very difficult for Jane, having to take care of Stephen and their children, she’s a very strong woman who loves her family and does all in her power for them.

This is definitely one my favorite movies; I think that the story is fascinating, moving, and inspirational. The movie was very well-made and the acting was phenomenal. It’s truly remarkable how much Stephen Hawking was able to accomplish despite his disease. I feel as if many other people with his condition would simply loose hope and give up, but Stephen, a brilliant mind, continued to develop his theories and share them with the world.

The Theory of Everything is available for checkout from the Mission Viejo Library.