If you are bored at home or just looking for a good book to read, I would got to your nearest bookstore or library and check out these books. When I started reading this series, I literally couldn’t put the book down. It’s sooooooo good. (Although I recommend it more for teenagers. Sorry to those of you who are tweens, one more year till you are an official teenager.)

This is one of those series where you can’t tell what the next book is about or else it totally ruins the book before, so I will try my best not to ruin it for anyone.

Sixteen-year-old Ever Bloom is not exactly what you find as your average teenager. Oh sure, she looks like everyone,  talks like everyone- that is, if she talks at all. Eliminating her drab wardrobe, hood over her head, and earbuds stuffed in her ears all the time, she is as normal as normal can be, except for the fact that she is a psychic. She can hear people’s thoughts and see their auras. Ever since Ever’s family died in a car accident a year ago, her life has been quite different. Ever has experienced nothing but emptiness and pain. With her only friends Haven, a goth girl, and Miles, a gay boy, Ever has been able to mange at her new school. When Damen August, a drop dead gorgeous seventeen-year-old, enrolls at her school, Ever’s world is turned around.

The only thing strange about this super hot new student is that Ever can’t seem to hear his thoughts and he doesn’t seem to have an aura. In the first book, Evermore, Ever tries to figure out Damen’s feelings for her. She discovers his unconditional love for as well as another secret. Damen may be the reason why she is a psychic. Unfortunately, there always has to be a bad guy in the book and that bad guy is Drina. With her gorgeous, fiery red hair and striking green eyes, she poses a threat to Damen and Ever’s love. Ever sees Drina as competition for Damen’s love. To find out more you are just going to have to read the first book, Evermore.

The second book of this series is Bluemoon. When a new student named Roman comes to Ever’s school, things seem to get a little out of hand. People who were thought to be worst enemies are now best of friends and everyone seems act differently, even Damen. Ever must figure out what Roman has done to her group of friends of whom she is worried will never be the same. With Damen growing weaker every day and Roman’s power increasing, Ever is presented with a choice one to reverse time and get her family back while losing Damen in the process or the other to stay with Damen and to try to nurse him back to health. Though, in the end, her choice puts Damen’s life on the line, keeping her and Damen apart.

In the third book, Shadowland, Ever’s choice has brought a curse upon Damen and her that gives them a deadly touch to each other. One single touch could mean the end of Damen’s life. Ever treks into the dark world of magick where she finds an unexpected friend, Jude Knight. Jude works at a psychic shop though he’s not one himself. Ever knows that her love for Damen is eternal and strong, but the tension between her and Jude makes her question herself. Is Jude really the one? Or is Damen her one and only soulmate? Got to read the books to find out. I can’t say anything about the other three books or else that would be spoiling the surprise. Its a good series,  I hope you enjoy it!

Between new school schedules and a ton of homework, is there time to seek out new books? Of course! Here is a list of books I am planning to read this fall. I have been waiting months for all of them, so they’d better be amazing. Hope you enjoy them, too.

This is the second book of The Raven Cycle where the ley lines have woken and ensure the lives Blue and her raven boys- Ronan, Gansey, and Adam- will never be the same. For Ronan, dreams are merging with reality. Meanwhile, the Cabeswater puzzle Gansey is trying to solve has taken the interest of some sinister people.

With a cliffhanger in the previous book, the continuation of The Heroes of Olympus continues the adventure of seven half-bloods with no time for failure as they travel to seal the Doors of Death. If they succeed, how will Percy and Annabeth ever escape the depths of Tartarus?

The ending to the Divergent series. When everything Tris knew is shattered, she goes beyond the fence and what awaits her may be worse than what she left behind. This book is told from dual perspectives (which I’m hoping includes Four’s point of view).

The Legend trilogy comes to a close. The Republic is improving, but with a new plague and possible war, the cost to save thousands of lives might mean the one June loves to give up everything.

This is the fourth and final book of the Soul Seekers series. Daire must face her archenemy, the Richters. Is there a worse foe out on the horizon that could end the world? Will Daire survive? Can love conquer all?

All these books are far along in a series, so I suggest reading the previous books before getting to this list. Which book are you most looking forward to? I honestly can’t choose. Happy reading! 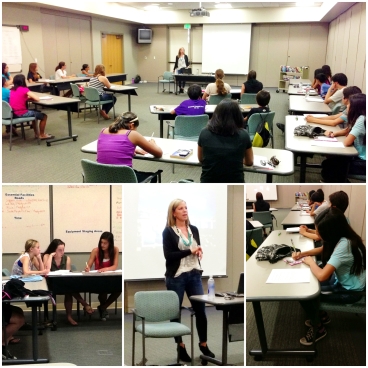 Earlier this month, an exceptional author came to Mission Viejo City Hall to talk about the basics of writing a story.

Alyson Noël is a very well-known author who writes books for young adults. She started her career as a flight attendant, but after the incident of 9/11, she became a writer. Since she was twelve years old, Alyson dreamed of being a writer. The Immortals, The Soul Seekers, and The Riley Bloom Series were some of the many books she has written.

Alyson Noël began her presentation by telling the audience about her early life. Her family was very poor and she took writing classes to benefit her writing when she was a teen. Her first book, Faking 19, took Alyson fifteen years to write. She kept on revising the book since the New York publishers kept rejecting it because it did not include a conflict. Now, Alyson Noël has written a lot more books that have been sold in a million copies, written in about fifty languages, and sold to an estimate of thirty countries.

Alyson also gave the audience many tips about writing. She explained that all stories need characters that transform, have goals, and have motivation. In addition, she advised that every plot must have a conflict and a theme. In my opinion, her speech was very inspiring and informative. She said that writing is harder than it looks, and there is nothing more intimidating to a writer than a blank page.

In addition, Alyson Noël recommended some books on writing such as Save the Cat by Blake Snyder, Story by Robert McKee, and On Writing by Stephen King.

For those who do not like to write or are not very good at writing, Alyson Noël’s speech might change your mind!