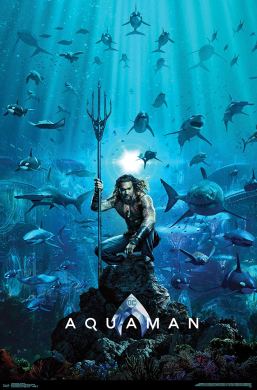 I recently went and saw Aquaman, and walked into the theater with the mindset that it would be just like all the other Marvel movies, super dark, a lot of action, a little storyline and some comic relief. And, this movie finally broke that formula though, it wasn’t necessarily anything that seemed that original. But, it was more of a fluff movie than some of the other recent and extremely dark Marvel movies that had been coming out like Avengers. So, it was nice to have something different that was slightly less dark with a little more storyline.

In essence, the movie seemed pretty typical. A forbidden love between two worlds with a child that has to bring the two together. And, of course, the child at first does not want to but, in the end, decides to try to save the day. So, the storyline is pretty much predictable. Though, the actions scenes where cool and the special effects throughout the entire movie were extremely well done.

This movie is the perfect movie to go and watch and turn your brain off. It is entertaining without much substance. But it provides a nice break to just stop thinking. I would suggest as a movie to go out and see with your friends and family to just have some fun. Since it is more of a light fluffy movie than a typical dark Marvel movie, you can finish the movie and not have that air of darkness and instead, it leaves you with a happy humorous mood. So it is great to just have some fun.

This past week, my family and I went to go see the new movie Aquaman. For me, I personally enjoy Marvel movies better than DC movies (in my own opinion, not everyone has to agree). However, this movie was not as bad as I thought it was going to be. Jason Momoa, the person who plays Aquaman played the part perfectly.

The movie starts off with Arthur Curry/Aquaman’s parents and how they met. His father, Thomas Curry, was human while his mother, Atlanna, is Atlantean making Arthur half-Atlantean. Because he is only half, the people of Atlantis reject him and call him the “bastards son”. From a young age, Arthur is trained by Nuidis Vulko, Atlanna’s loyal advisor so that one day, he might have a chance at ruling Atlantis.

Throughout the movie, Arthur’s skills are continuously tested as he faces things from spiteful half-brothers to revenge-filled humans to creepy creatures under the sea. However, he is not alone. Alongside him is Mera, daughter of King Nereus of Xebel, played by Amber Heard.

I am not going to spoil the movie so you’ll have to watch the movie to find out what happens next.

The plot of the movie is great, however it lacks comedic relief in my opinion. Despite this, everyone portrays their characters well and there is not any awkward or unnatural acting anywhere which is a plus!

I recommend this movie and is great to watch as a family.